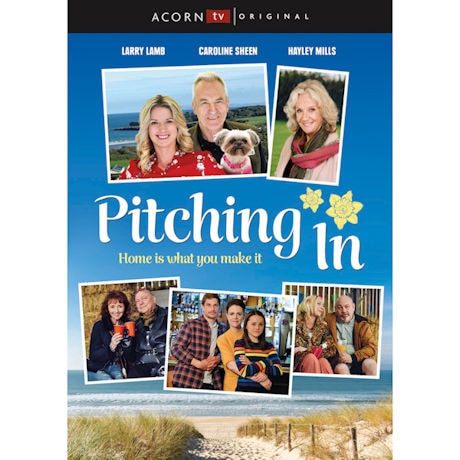 $39.99
Share Me:
add to wish list
Overview
Meet the eccentric inhabitants of Daffodil Dunes, a mobile home park in the idyllic coastal village of Glan Mor in North Wales. Park owner Frank (Larry Lamb, New Tricks) announces that he will be selling, but his daughter Carys (Carolyn Sheen, Les Miserables) convinces him to let her bring Daffodil Dunes into the 21st century. 4 hrs, 2 DVDs. Item can only be shipped within the Continental US.
Episodes
Episode 1: The Comeback Kid
The inhabitants of Daffodil Dunes mobile-home park are shocked to hear the park's owner, Frank, make a surprising announcement at his birthday party. Frank's daughter, Carys, home for the first time since her mother's death 18 months ago, sets out to change his mind.

Episode 2: Game of Drones
Frank's property agent, Iona, tries to convince him to reconsider her offer and asks him out on a date. Carys plans a medieval reenactment event, but things are still awkward between her ex-fiancé, Danny, and his new girlfriend, Tanya.

Episode 3: Survival of the Fattest
After a successful yoga event, Carys organizes a survival boot camp, but the formidable fitness expert she hires may be taking the job too seriously. While Carys's son unhappily starts at a new school, Frank is tempted by Iona's latest offer to sell up.

Episode 4: Just Like That
Frank wants to discuss Iona's increased bid with Carys, but they are both distracted by the sudden arrival of Carys's husband. Danny plans to propose to Tanya at her birthday party, and Carys assumes the worst about Frank's old friend, who seems to be hiding a secret.