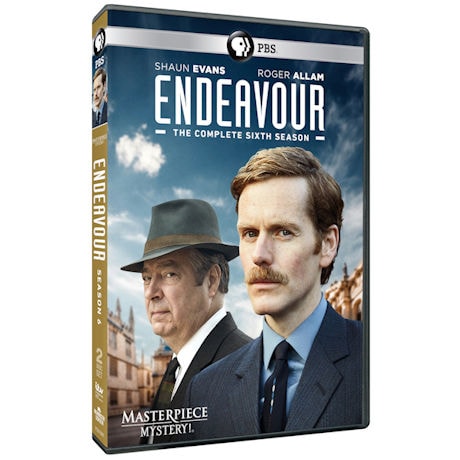 $39.99 Starting at $34.99
Share Me:
add to wish list
Overview
Shaun Evans charms audiences with his portrayal of the younger version of crusty Inspector Endeavour Morse in this highly successful and cerebral prequel. Season 6 is set in 1969, and the old Cowley team must battle crime and corruption to solve their greatest challenge. 4 episodes, 9 hrs, 2 DVDs or Blu-ray discs, SDH.


Episodes
Episode 1: Pylon
With the Cowley team scattered across Oxfordshire, it takes the disappearance and murder of a schoolgirl to bring Endeavour and Thursday back into the same orbit. When Endeavour refuses to accept that the main suspect is guilty, he has to uncover the truth and rescue a victim before it's too late.

Episode 2: Apollo
As the highly-anticipated moon landings of Apollo 11 draw near, Endeavour finds himself investigating the death of a promising young astrophysicist in a tragic car accident. But when the clues point to foul play, Endeavour enlists the help of Thursday to uncover the truth.

Episode 3: Confection
The murder of a renowned factory owner brings Endeavour to the sleepy village of Chigton Green, but he soon discovers there is more to this countryside idyll than meets the eye. When two further deaths are discovered, initial assumptions about a spurned husband and a doomed affair look likely.

Episode 4: Deguello
When an Oxford librarian is murdered, Endeavour and Thursday follow a trail that appears to connect to a seemingly dull college bequest, but personal animosities and professional rivalries rise to the surface as Endeavour digs deeper into the pasts of the suspects. Then, a local tragedy demands their full attention as the team uncovers the truth behind the crime that has haunted them all.