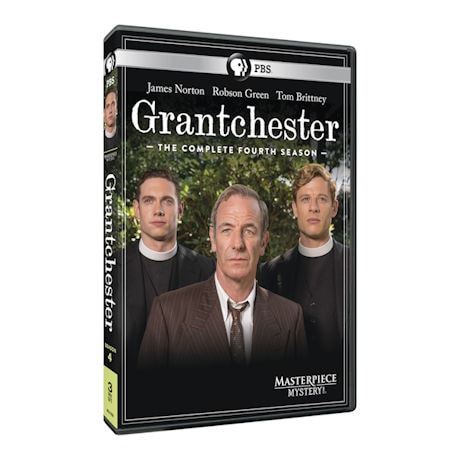 Starting at $39.99
Share Me:
add to wish list
Overview
Sidney Chambers (James Norton), a charming clergyman turned investigator, prepares to hand off the vicarage to Reverend Will Davenport (Tom Brittney). It's not long before murderous plots and crimes of passion test the newcomer's faith. 6 episodes, 6 hrs, 2 DVD or Blu-ray discs.
Episodes
Episode 1
Sidney is swept up in the formative civil rights movement when US pastor Reverend Todd and his daughter Violet arrive in Cambridge - and a murder sees racial tensions spike.

Episode 2
Feeling more lost than ever, Sidney struggles to remember a murdered woman's final words, while Geordie investigates a decaying slum that's connected to a deadly web of vice.

Episode 3
Geordie's anxieties about the future are brought to the surface when a professor dies at a cutting-edge computer laboratory, and he turns to Leonard for assistance with the case.

Episode 4
When a child from an isolated farming family is accused of murder, Will is the only one able to reach him--but it brings out unexpected sides of the young vicar, which shocks Geordie.

Episode 5
When Will asks for Geordie's help with a family matter, Geordie is surprised to discover where Will really grew up: a house filled with secrets and lies.

Episode 6
While Will struggles with a decision that will determine his future, the violent death of a Teddy Boy becomes conclusive proof to Geordie that the country's gone to the dogs.