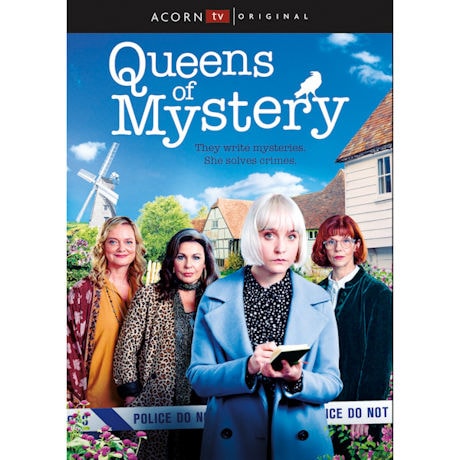 $39.99 $29.99
Share Me:
add to wish list
Overview
Follow the adventures of three crime-writing sisters Beth (Sarah Woodward), Cat (Julie Graham), and Jane (Siobhan Redmond) Stone and their 28-year-old niece, Detective Sergeant Mattie Stone (Olivia Vinall). Using their knowledge of crime — both real world and fictional — together they solve murders in the picturesque English region of Wildemarsh. But no matter how many cases they are able to crack, the unsolved mystery that haunts all the characters is that of Mattie's mother's disappearance twenty-five years ago. 6 episodes, 4 ½ hrs, 3 DVDs.
Episodes
Episode 1: Murder in the Dark: First Chapter
When a murder takes place at the local crime-writers' festival, DS Mattie Stone struggles to keep her well-meaning, amateur-sleuth aunts out of the investigation.

Episode 2: Murder in the Dark: Final Chapter
With another killing and Beth a suspect, Mattie races to solve the case and clear her aunt's name.

Episode 3: Death by Vinyl, First Chapter
'80s new wave band Volcanic Youth is in town to record a new album, but the reunion is put on hold when one of the band members turns up murdered.

Episode 4: Death by Vinyl, Final Chapter
Mattie investigates a new victim: the band's manager, who was stabbed in the back with a kitchen knife.

Episode 5: Smoke & Mirrors, First Chapter
The stage adaptation of Jane's book endures snafus before opening night, culminating in an onstage murder. Mattie searches for clues in the case of her missing mother.

Episode 6: Smoke & Mirrors, Final Chapter
Contending with another murder and a missing lead actress, the theatre company is forced to switch up the cast, while Beth and Cat pursue leads against Mattie's wishes.

Narrator: Juliet Stevenson (Bend It like Beckham, The Hour).