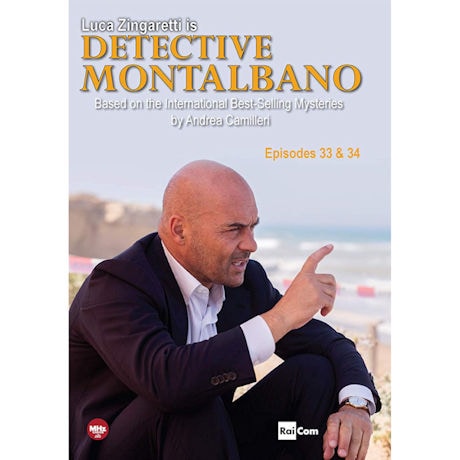 $29.99
BUY 2 OR MORE EPISODE SETS, SAVE 10%
Share Me:
add to wish list
Overview
Murder, betrayal, office politics, temptation…it's all in a day's work for Detective Salvo Montalbano. With his always loyal and sometimes effective police squad he solves crimes in Vigata, crossing paths with housewives and priests, liars, saints and Mafia dons. The series is filmed in the ancient, sun-washed Sicilian city of Ragusa, and is based on the international best-selling mystery novels by Andrea Camilleri. Italian with English subtitles. 2 episodes, 3 ½ hours 2 DVDs.
Episodes
The Other End of the Line
The Vigata police are working exhausting nights assisting immigrants arriving by boat to Sicily. Just as they get a break, a terrible local crime also comes to their attention: a tailor Montalbano recently hired to make a suit has been found slaughtered in her own shop. The woman appears to have been well-liked by her staff and the community, and her death leaves Montalbano reeling.

A Diary From 1943
A long-hidden diary opens a window to tragic events from the Allies' occupation of Sicily during WWII. While Montalbano tries to decipher the diary's references, a 90-year-old businessman is murdered in his home. It's up to Montalbano to figure out if there's any connection between the diary, the murder, and another 90-year-old (Dominic Chianese, The Sopranos) who's come home to Vigata from America.