A Discovery of Witches DVD or Blu-ray 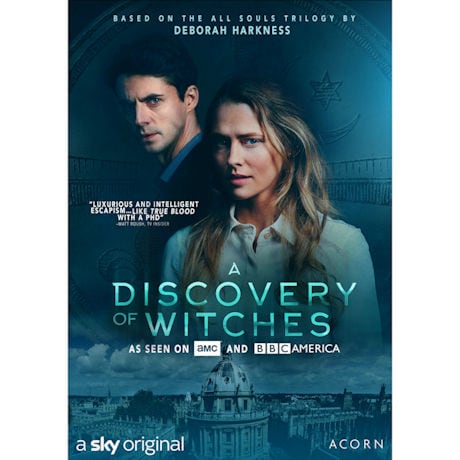 A Discovery of Witches DVD or Blu-ray

$39.99
Share Me:
add to wish list
Overview
Brilliant historian Diana Bishop (Teresa Palmer) is a witch living in denial of her own heritage. But when she unwittingly calls up an age-old bewitched manuscript from the depths of Oxford's Bodleian Library, she is thrown into the heart of a dangerous mystery—and the path of the enigmatic vampire Matthew Clairmont (Matthew Goode). Adapted from Deborah Harkness' best-selling All Souls trilogy. 8 episodes, 6 ½ hrs, 2 DVDs or Blu-ray discs.


Episodes
Episode 1
In Oxford's Bodleian Library, brilliant American historian and reluctant witch Diana Bishop unwittingly calls up an ancient magical manuscript, Ashmole 782, which has been missing for centuries. She soon finds herself confronted by acclaimed geneticist and vampire Matthew Clairmont, who is determined to get his hands on the book.

Episode 2
Blind to the interest she has stirred among the creatures, Diana fights an increasing pull towards the magical, but matters take an unexpectedly dark turn when Peter Knox sends Satu to intimidate her.

Episode 3
Domenico takes information he's extracted from Satu to menacing vampire Gerbert, who gains the advantage he has been waiting for. After sending Juliette into the world to do his bidding, Gerbert consults with Meridiana, the witch whom he keeps in thrall, but what does the prophecy she delivers mean?

Episode 4
Matthew's hope of keeping Diana safe at Sept-Tours appears short-lived, as Ysabeau refuses to welcome the warmblood under her roof.

Episode 5
Gillian pays a heavy price for her disloyalty to Diana, but not before news that vampires are studying witch DNA reaches Knox. The fallout threatens the fragile equilibrium between creatures, who want to end Matthew and Diana's relationship, whatever the cost.

Episode 6
Satu brutally tortures Diana in Gerbert's isolated castle ruins. Matthew, now sworn to hunt down and kill anyone who tries to harm Diana, attempts a daring airborne rescue mission with Baldwin in tow. But they are too late to prevent Satu invoking dark magic in a bid to open up Diana and see the magic inside her. Episode 7
After confronting her aunts, Diana learns the tragic circumstances surrounding why she was spellbound as a child.

Episode 8
Matthew's attempt to rescue Diana from Juliette goes horribly wrong, and Diana finally discovers just how lethal her magical powers can be. As Matthew lies dying, Diana must strike a dreadful bargain with the goddess and make the ultimate sacrificial pact, with enduring consequences.