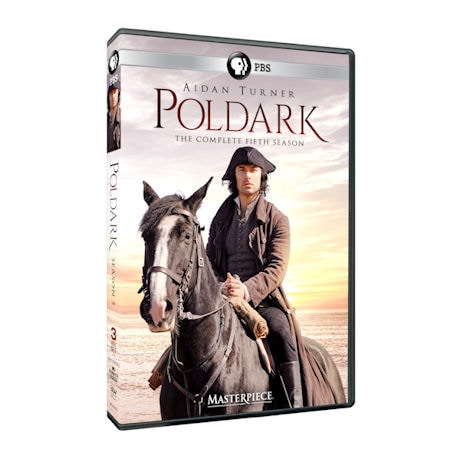 $44.99 Starting at $39.99
Share Me:
add to wish list
Overview
The world welcomes a new century and with it the promise of a hopeful future, but the past casts a long shadow over Cornwall. Ross Poldark (Aidan Turner) resolves to put Westminster behind him and spend more time with the people he loves. However, when an old friend emerges with a plea for help, Ross is compelled to challenge the establishment again, drawing the Poldarks into greater danger than ever before. With the fate of his nation in the balance, Ross must gamble everything to protect his country and those he loves. 8 episodes, 8 hrs, 3 DVD or blu-ray discs.


Episodes
• Episode 1 - Their peaceful lives are disrupted when an old friend's plea lands the Poldarks in a world of duplicity.
• Episode 2 - As George expands his power through a shady alliance, the Poldarks become caught in a deadly web.
• Episode 3 - First love blossoms, but disaster in Cornwall threatens the Poldarks' hopes of lying low.
• Episode 4 - Ralph seeks to ruin Ned as rebellion stirs and the Poldarks are caught in the middle.
• Episode 5 - George's cabal moves to ruin the Poldarks, and Morwenna wrestles a heavy decision.
• Episode 6 - Ross fights for Ned's life as Demelza must conquer betrayal at home. The young lovers take flight in hopes of a future together.
• Episode 7 - Ross discovers a French plot, and George finds himself at the mercy of Joseph and Ralph.
• Episode 8 - With the fate of his nation in the balance, Ross must gamble everything to protect his country and those he loves.