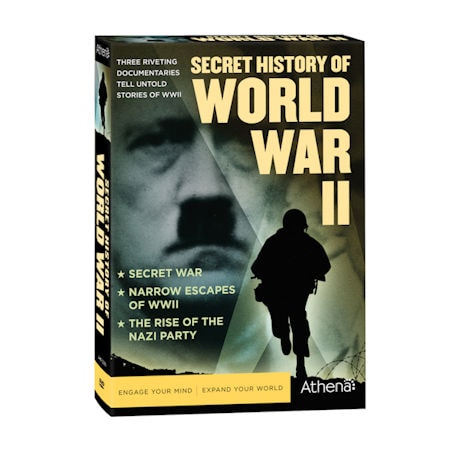 $99.99 $69.99
Share Me:
add to wish list
Overview
Historical heroes and villains abound in these three captivating, long-form documentaries about World War II. Includes Secret War, about Churchill's band of agents who helped liberate Europe; Narrow Escapes of World War II, stories of heroism in the face of overwhelming odds; and The Rise of the Nazi Party. 36 episodes, 30 hrs, 11 DVDs.
Episodes
Narrow Escapes of World War II
Revisit some of the war's most daring missions across the globe-from France to Russia to Southeast Asia-that are rarely recorded in history books.

Secret War
Go inside the Special Operations Executive and meet the agents ordered by Winston Churchill to 'set Europe ablaze.

The Rise of the Nazi Party
Discover how Hitler seized control of the German government and the minds of millions of it's citizens.