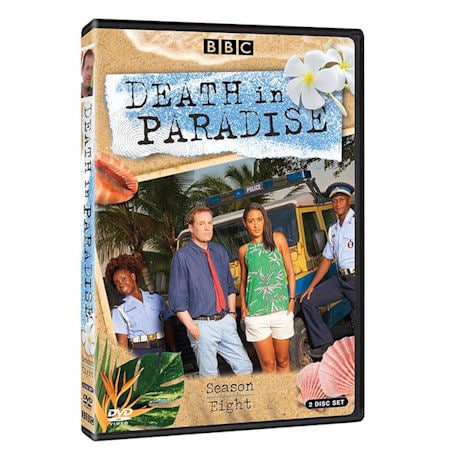 $39.99
Share Me:
add to wish list
Overview
DI Jack Mooney (Ardal O'Hanlon, Father Ted) is starting to get to know the people and places of Saint Marie. But there's little time for sightseeing as there are some fiendishly clever murders to solve. These are some of their most challenging cases yet. One of the UK's top rated dramas. 8 episodes, 7 ½ hrs, 2 DVDs. Shipping December 10, 2019.
Episodes
Episode 1
When a passenger is stabbed on the express bus to Honore, Jack and his team are baffled. No-one left their seat, so how on earth did they commit murder?

Episode 2
DI Jack Mooney and the team enter a nest of vipers when zoo owner Xander Shepherd is poisoned by a tranquiliser dart in the middle of the zoo grounds, leaving the family-run business in turmoil.

Episode 3
DI Jack Mooney and the team are mystified when Catrina McVey, the presenter of TV holiday programme Hot Shots, is found washed up on the shore near her Paradise Bay hotel.

Episode 4
In the wake of his father's death, Benedict Dacre rules the roost at the Paradise Skies Coffee plantation - but all is not plain sailing.

Episode 5
In this first episode of a two-part special, a shadow is cast over a small fishing community in the village of Belle Mer when their festival queen 'Mama D'Mer' Tiana, is murdered.

Episode 6
In the second episode of this two-part special, the Honoré police team are left stunned by another murder which is connected to the Tiana case.

Episode 7
Saint Marie mourns when radio legend Dezzie Dixon is murdered live on air, and Jack must unravel a complex mystery to find the culprit.

Episode 8
When a storm hits Saint Marie the Police Station becomes a crime scene. A man is found dead, locked inside, but how did he get in there - and how did the killer escape without touching any of the locks?