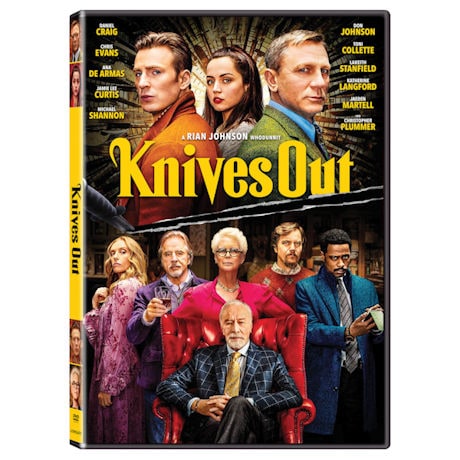 $29.99 $19.99
Share Me:
add to wish list
Overview
Harlan Thrombrey (Christopher Plummer) spent a lifetime becoming a rich and successful crime novelist. And on his 85th birthday, he invites his extended family to his mansion, hoping to move past their dysfunctional past and bring them together. Things take a turn for the worse when Harlan is found dead during the party, prompting Detective Benoit Blanc (Daniel Craig) to investigate. But will he be able to find the killer when everyone there that day had a reason to do it? "A deliciously entertaining whodunit." — The Guardian. 2 hrs on 1 DVD. Item can only be shipped within the Continental US.
Details
Packaging: Boxed
Run Time: 2 hours
Format: Widescreen
Number of discs: 1
Language: English
Foreign Language Subtitles: No
Color or B&W: Color
Region Code: 1
Aspect Ratio: 16:9
Audio Format: 5.1 Surround
Rating: PG-13