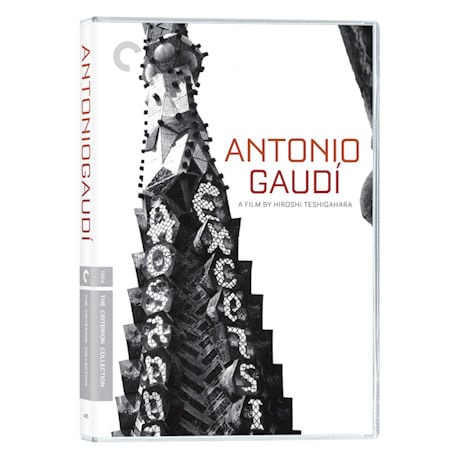 Extras
• High-definition digital restoration, with uncompressed monaural soundtrack
• Interview with architect Arata Isozaki from 2008
• Gaudí, Catalunya, 1959, footage from director Hiroshi Teshigahara's first trip to Spain
• Visions of Space: "Antoni Gaudí," an hour-long documentary from 2003 on the architect's life and work
• BBC program on Gaudí by filmmaker Ken Russell
• Sculptures by Sofu—Vita, a 1963 short film by Teshigahara on the sculpture work of his father, Sofu Teshigahara
• Trailer
• PLUS: An essay by art historian Dore Ashton, a 1986 reminiscence by Hiroshi Teshigahara, and excerpts from a 1959 conversation between Hiroshi and Sofu Teshigahara on their trip to the West