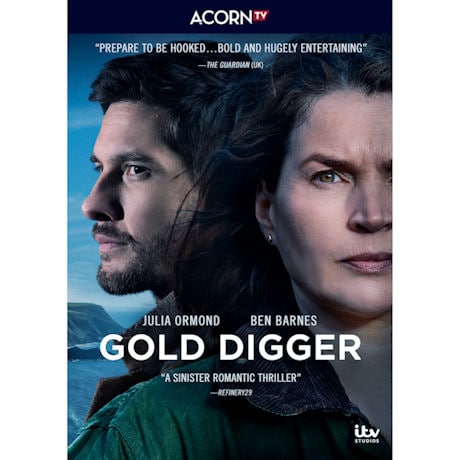 $39.99
Share Me:
add to wish list
Overview
Exclusive! Feeling adrift from her adult children and about to turn 60, Julia Day (Julia Ormond) meets Benjamin Greene (Ben Barnes), a thirty-something with a shrouded past. While Julia relishes her second chance at love, her children and ex-husband are suspicious of her new lover, certain he has an ulterior motive. 6 episodes, 6 hrs, 2 DVDs. We regret we cannot ship Gold Digger to Canada. Item can only be shipped to US destinations.
Episodes
Episode 1: Her Boy
Julia's disappointing 60th birthday turns around when she meets handsome young Benjamin. After a few days together, she introduces him to her three adult children.

Episode 2: Her Daughter
After a confrontation with her ex-husband, Julia and Benjamin decide to get away. In London, Julia meets Benjamin's friends, but it seems like he has something to hide.

Episode 3: Her Rival
Benjamin meets Marsha, Julia's ex-best friend and the woman with whom Ted had an affair. Later, Patrick and Della bring Julia purported evidence of Benjamin's infidelity.

Episode 4: Her Husband
Julia accepts Ben's marriage proposal but is reluctant to share the news at first. She eventually spills the beans to her kids over an already tense Christmas dinner.

Episode 5: Her Baby
The family is shocked when Benjamin's half-brother turns up. With the help of Marsha's daughter, Leo schemes to bring his parents back together, but the plan backfires.

Episode 6: Her Love
After discovering that Benjamin is not who he says he is, Julia returns to Devon and avoids seeing him. On her wedding day, Julia confronts Ted about that night long ago.