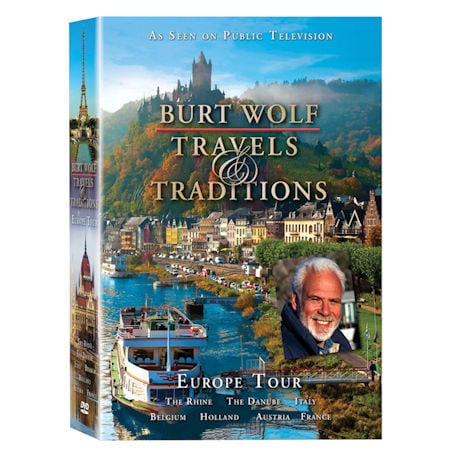 Overview
Traveler extraordinaire Burt Wolf leads an unforgettable journey through contemporary Europe, packed with gorgeous sights, historic landmarks, and local traditions. Highlights include cruises along the magical Rhine and Danube rivers, the French Riviera, Italy, Holland, Vienna at Christmas, and much more. 5 episodes, 7 hrs, 6 DVDs. Item can only be shipped within the Continental US.
Episodes
DVD 1: The Rhine and The Danube
The Rhine is one of the world s great rivers, starting in the Swiss Alps and dumping into the North Sea. Join Burt as he takes a cruise along the Rhine from Amsterdam to Basel. The Danube River is the second longest river in Europe after the Volga. Burt sets sail on this magical river as he leaves from Budapest and stops along the way in Bratislava, Vienna, Durnstein, Grein, Linz and Passau.

DVD 2: France
Provence and the French Riviera are filled with warm weather, intense sunlight and magnificent scenery. The best way to see the region is on a cruise on the Rhone River, and Burt shows you all the stops on his tour from Tournon to Nice. No trip to France would be complete without a visit to Paris, and Burt travels down the Seine and catches all the sights from the Eiffel Tower to the Musee D Orsay.

DVD 3: Italy
Rome is all about layers layers that could easily stand on their own, and yet being together in the same pot has made the entire dish more interesting. Burt travels throughout Rome hitting all the ancient Roman sites and finding some of the best dishes and culture in the world. About 3,000 years ago, a people known as Etruscans migrated from Eastern Europe to central Italy and set up a federation of 12 city-states. Today it is known as Tuscany and its people share with Burt the wine, food and traditions of their land. Milan has been an important city for well over 2,000 years. Today, Milan is an industrial powerhouse, and the financial and commercial enter of Italy.

DVD 4: Holland and Belgium
For thousands of years the best way to get around Europe was on a river boat. As a result many of the great cities of Europe were built on the banks of rivers. Burt travels to many of Europe's grandest cities in Holland and Belgium including Amsterdam, Schoonhoven, Dordrecht, Antwerp, Brussels, Ghent and Bruges.

DVD 5: Spain, Switzerland, & Austria
Everyday for the past 1200 years pilgrims who have been walking the ancient road to the city of Santiago de Compostela arrive and celebrate the completion of their journey. Explore this amazing place and all its wondrous history. Christmas is celebrated in cities through the world, but what takes place in the Austrian capital of Vienna is unique. Join Burt as he shows you the magic of Vienna at Christmas. The Swiss Alps were born about 100 million years ago when Europe and Africa collided. Today, Burt shows you why Switzerland is an amazing place of mountainous beauty and charming culture.

DVD 6: Bonus Disc: Great Hotels & Shopping
Burt takes you behind the scenes of the most wondrous and grand hotels in the world, and take you on exclusive trips to the most fabulous shopping destinations in the world.

Cast
Hosted by Burt Wolf
• Winner of a James Beard Award for "Best Television Food Journalism"
• Travel columnist for the Washington Post and Salon.com
• Has written and produced over 400 programs and 4000 segments on his travels throughout the world looking at the history, architecture, culture, customs, foods and festivals of some of the world's most interesting locations