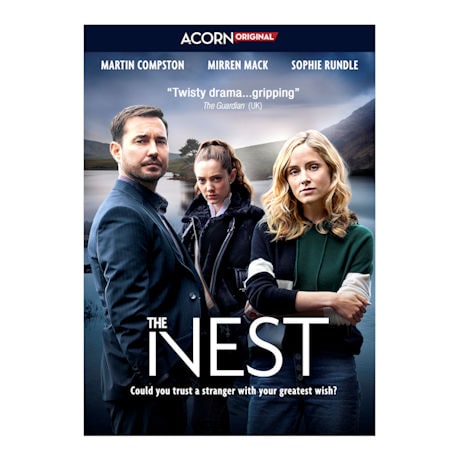 $39.99
Share Me:
add to wish list
Overview
Dan and Emily seem to have it all. They are crazy about each other, live in a beautiful home, have successful careers, and have all the money they could ever need. Only one thing is missing—a baby—and they've been trying for years. When by chance they meet Kaya, an eighteen-year-old orphan who agrees to carry their baby, it seems like a dream come true. But what's the catch? 5 hrs, 2 DVDs. SDH.
Episodes
Episode 1: Chance Encounter
Wealthy couple Dan and Emily have everything they want, except a baby. When Emily accidentally hits Kaya, a down-on-her-luck 18-year old, with her car, Kaya makes a surprising proposal.

Episode 2: The High Life
Three months later, Kaya is pregnant and living comfortably at Dan and Emily's home but starts having second thoughts about the surrogacy after a night at the club. Meanwhile, ambitious young reporter Eleanor wants to investigate a body found in the River Clyde.

Episode 3: Prom
Dan is tormented by the information he found out about Kaya, while Emily happily prepares for their baby's arrival. Ahead of prom night, Kaya decides to bring her relationship with Emily's nephew, Jack, out into the open.

Episode 4: Clean Break
Kaya recovers from the premature birth, but the baby's future is uncertain. Dan settles into his new role as a father, while Emily fears that something isn't right. Eleanor convinces Kaya's mother, Siobhan, to visit, but Kaya refuses to see her or Jack.

Episode 5: Best Interests
Dan and Emily disagree about whether to take legal action when Kaya blocks their rights to have contact with the baby. Kaya grows closer to Siobhan, not realizing her involvement with Eleanor.