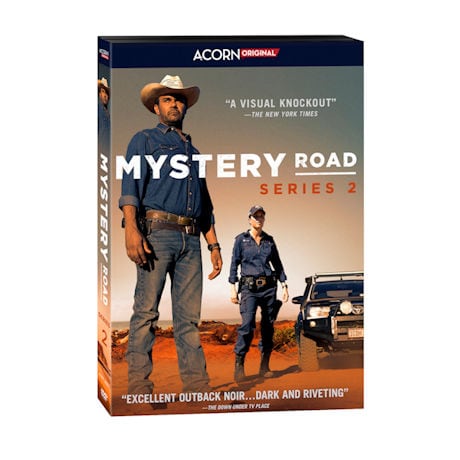 $39.99
Buy both series and save 10%!
Share Me:
add to wish list
Overview
Detective Jay Swan moves to a small coastal community in Northwest Australia to be closer to his family. When a decapitated body washes up in the mangroves, Jay finds that secrets from the past run deep and dark, and the present is just as dangerous. This award winning drama from Down Under has "an authenticity and urgency unmatched by any other Australian crime series" —The Guardian. 6 episodes,5 hrs, 2 DVDs or Blu-ray, SDH.
Episodes
Episode 1: The Road
Detective Jay Swan arrives to the small coastal town of Gideon to investigate the murder of a man found decapitated in the water. Working with Fran Davis, a local constable with deep ties to the community, Jay determines the killing was drug related.

Episode 2: The Flare
While a suspect stews in the cells, Jay and Fran search for enough evidence to charge him. As Jay takes matters into his own hands, archeologist Sandra Elmquist suffers a crisis of conscience after making a gruesome find at her dig site.

Episode 3: Artifacts
Believing the human remains found near the church to be her missing cousin, Zoe, Fran asks for Jay's help investigating. Sandra faces pressure to close the dig site, and the discovery of the missing head provides new leads.

Episode 4: Broken
When Mary's new boyfriend, Simon, saves Jay by shooting and killing his attacker, Jay weighs whether to say he fired the fatal gunshot himself. As Fran reels from the news that the bones do not belong to Zoe, Jay suspects Fran's boss, Owen, may be involved in the murder and asks for her help proving it.

Episode 5: To Live with the Living
Mary starts to see Simon's true colors but does not fully understand the danger he poses, until an incident at the hospital. Sandra works to uphold her deal with Fran's sister, and Owen suspends Jay after a complaint is made against him.

Episode 6: What You Do Now
Jay checks on Mary at the motel, leading to a tense confrontation with Simon. As Fran searches for closure on Zoe's case, Owen must decide where his loyalties lie.

Extras
Behind the Scenes (27min)
Cast
Aaron Pedersen (Jack Irish, A Place to Call Home), Jada Alberts (Wentworth), Tasia Zalar (Wentworth), Callan Mulvey (Underbelly), Sofia Helin (The Bridge)
Press
"Your new favorite police drama and one that will leave you on the edge of your seat" — The Iris (Australia)