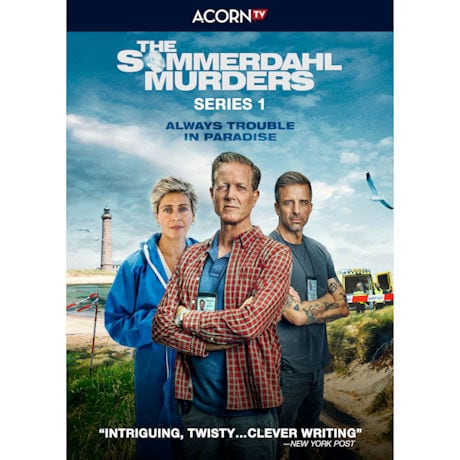 $49.99
Share Me:
add to wish list
Overview
DCI Dan Sommerdahl investigates murders in a lovely Danish coastal town with his best friend, Detective Flemming Torp, and his wife, Marianne, a criminal technician. Has Dan's years of devotion to the job hurt his marriage? Relationships are tested and loyalties shift, the trio must still work together to solve heinous crimes in Elsinore. "Flips the Nordic noir genre on its head" — The Sun (UK) Based on best-selling book series by Danish author Anna Grue. 8 episodes, 8 hours, 2 DVDs. Mature content. In Danish with English subtitles.
Episodes
Episode 1: Till Death Do Us Part, Part 1
Dan and Marianne Sommerdahl's 25th wedding anniversary is interrupted when a Slavic woman is found dead on the beach next to the Kronborg Castle.

Episode 2: Till Death Do Us Part, Part 2
With the odds of the baby's survival running out, the detectives trace a packet of Valium with Liliya's prints on it. Marianne has weighty matters to discuss with Dan.

Episode 3: First Contact, Part 1
When lottery winner Ursula Jørgensen falls to her death, the investigation leads Dan and Flemming on the path of a serial swindler.

Episode 4: First Contact, Part 2
Dan and Flemming create a false identity for Marianne, who will pretend to be another lottery winner to lure the con man out of hiding with the promise of a new mark.

Episode 5: The Law of Retribution, Part 1
Playboy entrepreneur Peter Mynster-Schmidt is found dead in his jacuzzi on the same day his company's accountant goes missing. Dan and Flemming try to track him down.

Episode 6: The Law of Retribution, Part 2
Svend analyzes P:A:H's accounts and digs up evidence of financial fraud, and Dan gets a curious tip from one of Peter's lovers.

Episode 7: Fatal Score, Part 1
When a member of Elsinore football club's staff is killed, it's a financial disaster for the club. Dan and Flemming focus in on Elsinore's star player, Jonas Andersen.

Episode 8: Fatal Score, Part 2
As tensions grow between Dan and Flemming over Marianne, the detectives try to uncover the link between Jonas and Alexander Bouhari, rival club Lyngby's star player.