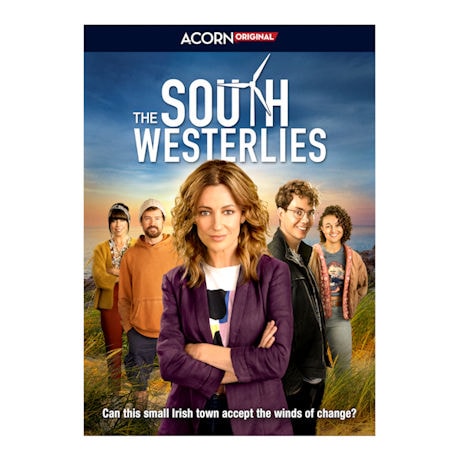 $39.99
Share Me:
add to wish list
Overview
Hoping for a promotion, environmental consultant Kate Ryan agrees to go undercover in Carrigeen, West Cork to quell objections to a new wind farm. But she discovers more than just strong opposition to the project. Kate has history in Carrigeen, and she sees the father her son has never met. Will her professional and personal problems cost her the promotion? 6 episodes, 6 hrs, 2 DVDs.
Episodes
Episode 1: Little White Lie
Norwegian company NorskVentus sends their Dublin-based consultant Kate Ryan to the Irish town of Carrigeen to discreetly quell opposition to their offshore wind farm. But Kate's undercover mission is off to a rocky start after running into her estranged friend Breege and old flame Baz.

Episode 2: No Word of a Lie
Kate attempts to change hearts and minds before a key town-hall vote and accepts a radio show guest-slot with Callum, the local DJ. Meanwhile, Kate's son, Conor, takes surfing lessons with his crush, Poppy, which also brings him closer to Baz.

Episode 3: Surf's Up
Kate talks to Breege about letting Conor work at the café so he'll spend less time with Baz. Kate tries to win over Poppy's father, Teddy, one of Carrigeen's loudest wind-farm objectors. Later, Kate is rattled by a surprise visit from NorskVentus boss Sigrid.

Episode 4: Out in the Open
Conor recovers from the incident at the beach, unaware that Kate let slip news of his true parentage to Baz. As Kate's mother unexpectedly arrives in Carrigeen, Callum tells Kate about an anonymous tip-off that could swing public opinion in their favor. Breege prepares for a foster interview appointment, but her husband doesn't seem to be as excited.

Episode 5: Home Truths
Conor storms away from Kate after learning the truth about his father, and Poppy urges Baz to have a real talk with him. Kate tells Sigrid her hunch about who is behind the oil pipeline application, prompting Callum to drag Teddy's name through the mud on his radio show.

Episode 6: Windswept
Kate becomes a pariah to everyone but Baz when her involvement with NorskVentus is outed to the whole town. With Sigrid showing her true colors and Conor about to make a life-altering decision, Kate must decide where her loyalties lie.