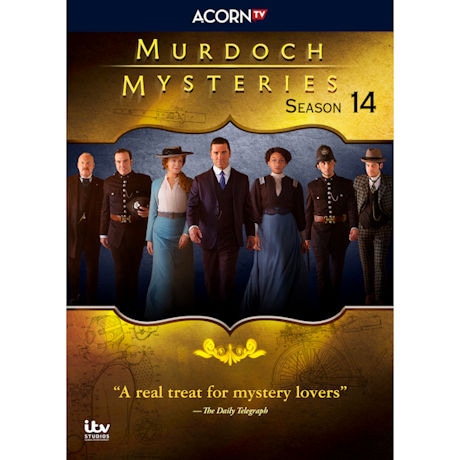 $49.99
Share Me:
add to wish list
Overview
Detective Murdoch (Yannick Bisson) continues his inventive detective work with Ogden's (Hél&eagravene Joy) unflinching support even after an investigation leads him to a family member that he never knew about. 11 episodes, 8 hrs, 3 DVD or blu-ray discs, SDH. We regret we are unable to ship this title to Canada. Item can only be shipped to US destinations.
Episodes
Episode 1: Murdoch and the Tramp
When Murdoch investigates the death of a vaudeville comic, he crosses paths with Charlie Chaplin, Stan Laurel, and Buster Keaton.

Episode 2: Rough and Tumble
When Brackenreid's youngest son is accused of murder, the inspector refuses Murdoch and Watts's help to clear his name.

Episode 3: Code M for Murdoch
Murdoch intercepts a coded message from James Pendrick, who has been abducted after making a major scientific discovery.

Episode 5: Murder Checks In
William and Julia's romantic weekend turns into an investigation after a guest is stabbed at the inn they're visiting.

Episode 6: The Ministry of Value
After the suicide of disreputable woman, Murdoch suspects murder and nefarious dealings involving arranged marriages.

Episode 9: The .38 Murdoch Special
Murdoch's investigation of a murder at an opium den intersects with Brackenreid's pursuit of Nomi's missing friend.

Episode 10: Everything Is Broken, Part One
When a woman's body is found dissolved in a drum of lye, Murdoch fears his old lover Anna Fulford has been caught by a crime family.

Episode 11: Everything Is Broken, Part Two
Reeling from the revelation he has a young son, Murdoch seeks to avenge the murder of Anna Fulford.

"A real treat for mystery lovers" — The Daily Telegraph

"Blend[s] humor and mystery with plenty of sly winks and a refusal to take itself too seriously" — Strandmag.com