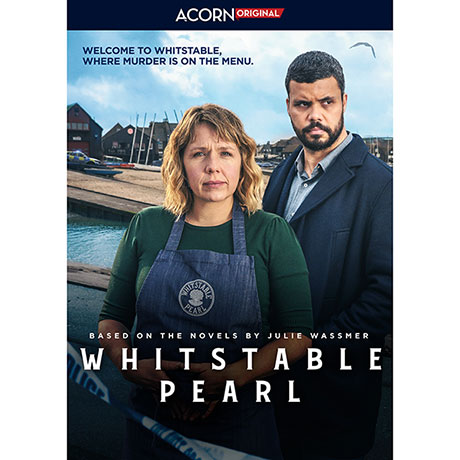 $39.99
Share Me:
add to wish list
Overview
Big-hearted restaurant owner Pearl Nolan (Kerry Godliman) pursues her lifelong dream and starts up a local detective agency in the English seaside town of Whitstable. Locals soon flock to her with all kinds of cases, but when a friend dies suspiciously, Pearl finds herself in conflict with gruff new cop DCI Mike McGuire. 6 episodes, 5 hrs, 2 DVDs.
Episodes

Episode 1: The Free Waters
Restaurant owner Pearl Nolan discovers the body of her friend and oyster supplier chained to the anchor of his ship. The police, led by out-of-towner Chief Inspector Mike McGuire, believe it was an accident, but Pearl, who also runs a private detective agency, suspects foul play.

Episode 2: Random Acts
Working with local cop DS Nikki Martel, Mike investigates the death of a diabetic estate agent force-fed marmalade. When a woman hires Pearl to look into a large sum of cash left in her mailbox, Pearl discovers Whitstable may have a mysterious benefactor—but are they connected to the murder?

Episode 3: Civil War
When a recently retired DCI is shot dead during an English Civil War reenactment, Mike immediately suspects the victim's wife, but she hires Pearl to find out if someone could be targeting her, too. Pearl and Mike plan a date, but a miscommunication puts them at odds.

Episode 4: Disappearance at Oare
Pearl agrees to help a woman who received a note claiming her missing husband did not die from suicide. Pearl connects the case to a grief-counseling church group and a drowning years ago. As Christmas approaches, Mike sinks into a depression, despite taking on a new flat in Whitstable.

Episode 5: A Cup O' Kindness
When a mother takes her daughter out for a boat ride despite the father's wishes, the boat starts taking on water and the two need to be rescued. Was it an accident, or were they targeted? Pearl investigates while Mike tries to enjoy his time off from police duty in the days before New Year's Eve.

Episode 6: The Man on the Blue Plaque
A 30-year-old skeleton washes up on the shore, and the victim has a very personal connection to Pearl. Pearl's budding romance with Mike is threatened when he identifies a suspect close to home.