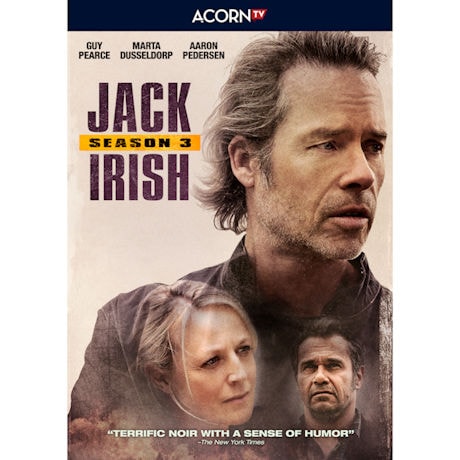 $39.99
Share Me:
add to wish list
Overview
Three years have passed and Jack lives a quiet life as a lawyer and father. But when an off-duty cop is killed, he, journalist and ex-love Linda, and friend Cam find themselves knee-deep in police corruption and long-buried secrets. As new details surface about his wife's murder 20 years ago, Jack begins to question his past—and risk his future. SDH. 4 episodes, 4 hrs, 2 DVDs or Blu-ray discs.
Episodes

Episode 1
The execution-style death of an off-duty cop rattles Barry Tregear, who asks Jack to tail ex-cop Mick Khoury, which Jack accomplishes in between parenting tasks. But when Khoury catches Jack and attacks him, the panic and shock give Barry a heart attack. At the hospital, Barry lets slip something about Isabel’s death that shakes Jack to the core and prompts him to begin reinvestigating her murder.

Episode 2
Despite the police ruling Barry’s death a suicide, Jack refuses to believe it. Fueled by grief, he tracks down Linda, but she’s hesitant to get involved. After discovering Khoury dead as well, Jack searches for the mystery woman he saw with Barry at the hospital. The trail eventually leads him to a drug bust 25 years ago called “Great White”—and to a theory about the current spate of killings.

Episode 3
Jack and Linda use Casey to try to track down Troy Milovich but come up short. Later, it’s Troy who finds Jack—at the worst time, validating Evie’s decision to move away with Sami. A mysterious figure called “The Banker” sends invites to the payday from Great White as the cut of the money increases with each murder. Jack seeks comfort in Linda, and Nina is not who she seems to be.

Episode 4
Knowing she’s made a serious mistake, Linda refuses to help Jack investigate, as Evie and Sami leave for the country. Jack follows a hunch and returns to Khoury’s boat, where he has a revelation. As the Great White payday approaches, more people come into the line of fire, and Jack must lay to rest the ghosts of the past—or risk losing everything all over again.