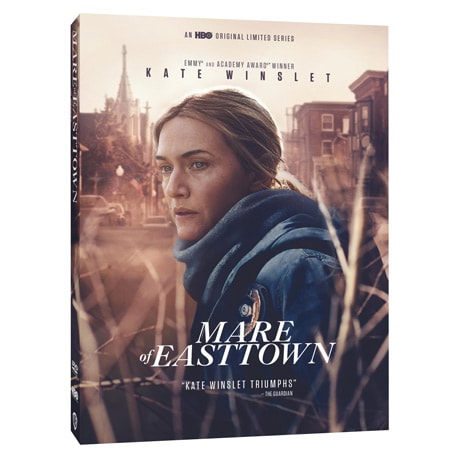 Marianne "Mare" Sheehan (Kate Winslet), a police detective with deep ties to her community--the Philadelphia suburb of Easttown. As Mare investigates the murder of a teenage mother, she must also reopen a case involving the disappearance of another young woman, as her own life crumbles around her. 7 episodes, 7 hrs, 2 DVDs. SDH.

Episode 2: Fathers
Mare visits a grisly murder scene before informing the victim's enraged father; as a video from the night of the crime surfaces, Mare questions suspects in the case and gives an icy welcome to county Detective Colin Zabel, called in to assist.

Episode 3: Enter Number Two
As Mare and Colin parse new physical evidence, phone records lead to an unlikely suspect; after lashing out at Helen about a possible custody fight over Drew, Mare receives some unprompted advice from Richard on how to move forward with Carrie.

Episode 4: Poor Sisyphus
With Mare forced to take a backseat on the case, Colin presses a local priest about the vague circumstances that prompted his transfer to the parish; an anonymous call gives Dawn hope that Katie might still be alive.

Episode 5: Illusions
In her mandated therapy, Mare opens up about her family's history with mental health; Lori tries to get to the bottom of her son's outburst at school; Mare meets with a semi-retired source to help find a possible connection to her three cases.

Episode 6: Sore Must Be the Storm
After a heroic rescue lands her in the hospital, Mare awakes to the unshakeable pain of losing a friend. Then, given a second chance by Chief Carter, Mare reevaluates old suspects, which leads to a shocking clue.

Episode 7: Sacrament
When her case takes a devastating turn, Mare's family and friends process the fallout while she attempts to find her own way forward.