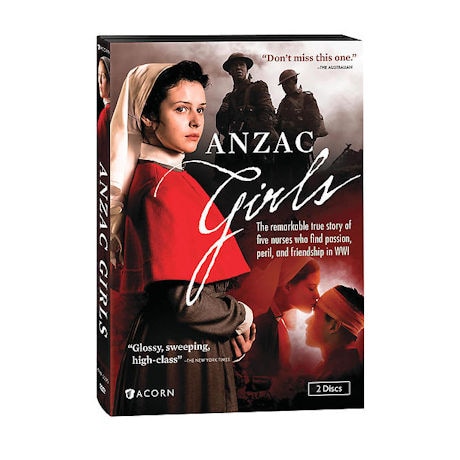 $49.99 $39.99
Share Me:
add to wish list
Overview
Five young Australian and New Zealand nurses arrive in Europe to serve in WWI. Full of romantic notions, they face the carnage of Gallipoli and the Western front, horrific living conditions, prejudice, and devastating personal loss. Rising to meet the challenge, they find love and lasting friendship. Based on the book The Other ANZACs, drawing on the real nurses' letters, journals, and historical records, this acclaimed Australian miniseries tells the harrowing, life-affirming stories of five unsung heroines. 6 episodes, 6 hrs, 2 DVDs, SDH.
Episodes
Disc 1
Episode 1: Adventure
Following the outbreak of WWI, the Australian Army Nursing Service is hastily deployed. Four Australian nurses and one New Zealander arrive in Cairo in early 1915. Flirtatious Alice catches the eye of a handsome lieutenant, while her roommate, Elsie, carries a secret. The carnage of the Gallipoli landing in April is worse than anything the nurses could have imagined.

Episode 2: Duty
The August Offensive results in some of the campaign's worst casualties. Grace and Olive are sent to the barren Greek island of Lemnos to care for the wounded. Once there, they find no supplies, no hospital, ghastly living conditions, and a commanding officer who doesn't want them there. Elsie fights for her husband's life in a British hospital, and Grace receives devastating news.

Episode 3: Endurance
By autumn 1915, widespread illness and low morale are taking their toll. Lieutenant Harry Moffitt, the man Alice loves, has been sent back to the Australian hospital in Cairo with severe typhoid. The chipper, resilient Olive, still on Lemnos, faces her darkest hour. After the withdrawal from Gallipoli, the ANZAC girls are reunited in Cairo. Elsie must make a difficult choice.

Disc 2
Episode 4: Love
In spring 1916, Allied forces are sent into France. Alice, Olive, Hilda, and Grace are temporarily posted to a British hospital in Rouen, where they are treated with scorn by the nursing staff. Olive reconnects with Pat Dooley, a young orderly she met on Lemnos. Grace is promoted and sent to London, and Alice receives shattering news.

Episode 5: Mateship
The war in France drags on into the winter of 1916. With no proof of Harry's death, a grief-stricken Alice grasps at hope. Hilda discovers a talent for anesthesia, then learns that Australian nurses are banned from that work. Luckily, she's a Kiwi. Olive defies her parents to follow her heart, and Elsie Cook returns as a Red Cross nurse.

Episode 6: Courage
In late summer 1917, after years of bloodshed, the war rages on. Olive has resigned and left for Australia with Pat. Alice and Hilda are in Trois Arbres, very near the front line. Elsie is at the Red Cross hospital in Amiens. All but one of the nurses serve until the very end. Looking back years later, Alice outlines the rest of their lives.
Details
Packaging: Boxed set
Run Time: 363 minutes, plus bonus programming
Format: Widescreen
Number of Discs: 2
Language: English
Subtitles: No
Color or B&W: Color
CC: No
SDH: Yes
Region Code: 1
Aspect Ratio: 16:9
Rating: NR
Press
"Beautifully shot, multilayered drama"--The Sunday Telegraph (Australia)