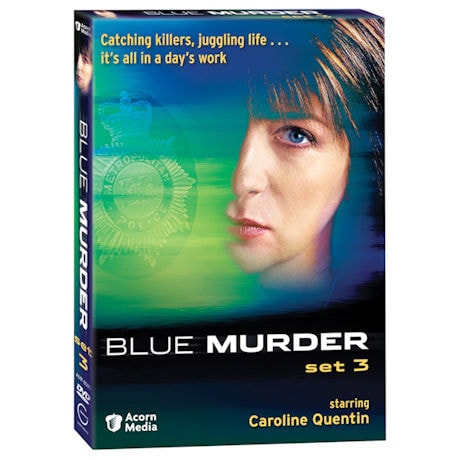 $39.99 $31.99
Share Me:
add to wish list
Overview
When strangers ask Janine Lewis what she does for a living, she tells them, "Crisis management." And she's not kidding. As detective chief inspector, she supervises a squad of cops investigating some of Manchester's most brutal, highly publicized crimes. As a single mom, she wrestles with soccer practices, field trips, and schoolwork for her four children. She handles her daily crises with energy and aplomb, protecting her kids as well as the detectives under her command with a fierce maternal affection. Award-winning actress Caroline Quentin (Jonathan Creek, Men Behaving Badly) portrays Janine with the perfect combination of toughness and tenderness. And Ian Kelsey (Casualty) brings a subtle vulnerability to his role as DI Richard Mayne, the hunky lead detective on Janine's team. These tense, tightly plotted mysteries show the everyday trials and triumphs of a woman balancing career and family. 3 episodes, approx. 204 min. on 2 DVDs.
Episodes
Disc 1
Episode 1: Not a Matter of Life and Death
After footballer Duane Kent--a rising star in the youth league--gets stabbed in a street brawl outside a nightclub, Janine and her team investigate. They soon find that the dead teen seems to have led a double life, far from the golden boy image held up by his parents, girlfriend, and coaches.

Episode 2: Desperate Measures
In the midst of a much-publicized malpractice lawsuit, Dr. Donald Halliwell is shot dead outside his office. Then a disgruntled doctor in Halliwell's practice goes missing. Janine and Richard uncover a real mess in the good doctor's personal and professional life--and plenty of motives for murder.

Disc 2
Episode 3: Crisis Management
Only a week before the regiment's deployment to the Persian Gulf, a sergeant major dies on the supposedly friendly confines of his base, the victim of a vicious attack. Called to the scene, Janine seems quite taken by her handsome military counterpart in the investigation. But Richard believes that the military has its own agenda, and his suspicions involve more than mere jealousy.
Details
Packaging: Boxed Set
Run Time: 204 minutes
Format: Widescreen
Number of discs: 2
Language: English
Subtitles: N/A
Color or B&W: Color
CC: Yes
SDH: No
Region Code: 1
Aspect Ratio: 16:9
Rating: N/A
Press
"The best British mystery you haven't seen."--San Francisco Chronicle

"Intricate storytelling, convincing characterizations and pleasing plot twists are the hallmarks of this whodunit"--DVD Talk
Awards