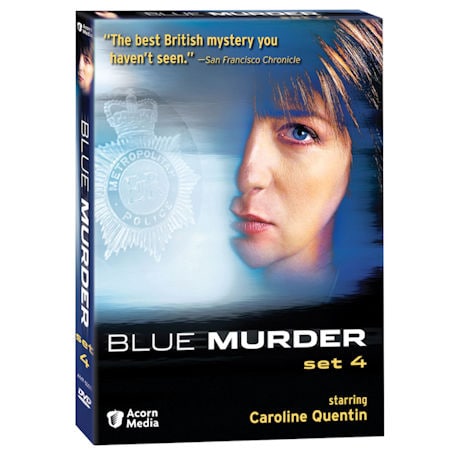 Overview
In the squad room, the cops on the Manchester murder investigation unit call Janine Lewis "Boss." At home, the kids simply call her "Mum." In both places, she manages to keep everybody in line-but just barely-with a firm yet affectionate hand. Award-winning actress Caroline Quentin (Men Behaving Badly, Life Begins) brings astonishing dramatic depth to her role as a chief detective and single mom trying to balance the demands of career and family. Ian Kelsey (Casualty) costars as Janine's fiercely loyal second in command and erstwhile romantic interest. This six-episode set sees Janine tackle some of her most baffling cases yet: the murders of an illegal Belarusian emigre, a suburban cheerleading coach, a rock star about to break into the big time, and more. In Blue Murder's signature style, heart-tugging domestic drama and good-natured workplace ribbing leaven each suspenseful, grimly realistic mystery. 6 episodes, approx. 274 min. on 2 DVDs.
Episodes
Disc 1
Episode 1: Private Sins (Part 1)
While mulling over a promotion that would take her off the squad, Janine supervises a case involving an illegal Belarusian immigrant and private investigator found murdered in a parking lot. At the same time, DS Tony Shap launches a covert investigation of his own.

Episode 2: Private Sins (Part 2)
After a key informant winds up dead, Shap's involvement strains relations on the squad and puts his career in jeopardy. Meanwhile, the tangled affairs between the Belarusian's employer and the family whom he was watching reveal even more motives for murder.

Episode 3: Tooth & Claw
Someone strangled veterinarian Ruth Turner on her daily run near bucolic Hunter's Low. Janine and her team find illicit sex and illegal activities roiling under the placid surface of the community. And a series of arsons, which may or may not be connected to the murder, complicates their investigation.

Disc 2
Episode 4: Having It All
On the morning after her team's crushing defeat in a cheerleading competition, Melanie Gaskell discovers her mother, Helen, bludgeoned to death in the garage. Helen had also coached the cheerleaders, and Janine realizes that the squad harbors emotions more sinister than team spirit.

Episode 5: This Charming Man
Jack Taylor--charismatic leader of an up-and-coming rock band--dies in his apartment after a sold-out concert. The investigation takes Janine and Richard deep into Manchester's music scene, where personal and professional jealousies run riot.

Episode 6: Inside
For 15 years, Bernard Aspen served a life sentence while his family protested his innocence and campaigned for his release. When someone drowns him in a prison washroom, Richard sees only one way to catch the killer--go undercover inside the jail, risking his own life in the process.
Details
Packaging: Boxed Set
Run Time: 271 minutes
Format: Widescreen
Number of discs: 2
Language: English
Subtitles: N/A
Color or B&W: Color
CC: Yes
SDH: No
Region Code: 1
Aspect Ratio: 16:9
Rating: N/A
Press
"The best British mystery you haven't seen."--San Francisco Chronicle

"Grade A. The episodes on this DVD set are all expertly written, directed and acted."--Exclusive Magazine
Awards