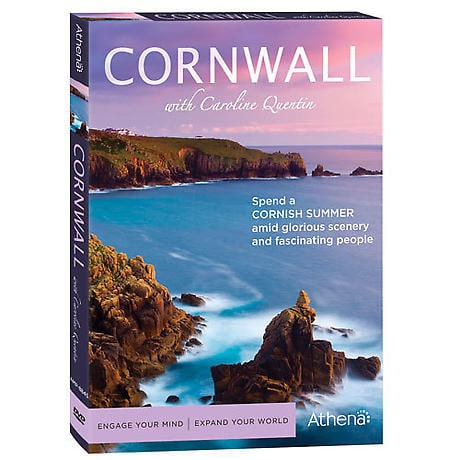 Overview
Spend a Cornish summer with Caroline Quentin (Blue Murder, Men Behaving Badly). Full of gorgeous scenery and quirky locals, the Cornwall peninsula is home to aristocrats in centuries-old manors and beachcombers barbecuing lobsters. Traveling its length and breadth, Quentin dives headlong into the seasonal festivities, mingling at a village pub, cheering on a regatta and infusing each episode with charming wit. 8 episodes, 3 hrs, 2 DVDs, SDH. From Athena.
Episodes
Disc 1
Episode 1
Winemaking and surfing may seem more at home in France than England, but in Cornwall, ripened grapes are harvested at the Camel Valley winery and locals paddle out for big swells at Chapel Porth Beach.

Episode 2
Owners of a converted country barn show off their property to an agency that finds homes for seasonal residents. Cornish native Lorna Bean and family sail off the rugged coast to catch fish bound for top-rated London eateries.

Episode 4
Surf's up at Chapel Porth Beach, one of 300 scenic stretches of sand that lure sun worshippers to the Cornish coast. Waves have been known to rise 30 feet, but that doesn't scare an octogenarian couple as they compete in the World Bellyboarding Championship.

Disc 2
Episode 5
Locals say that 400-year-old PrideauxPlace is haunted, but the ghosts are reportedly as friendly as the current residents, whose family has inhabited the sprawling mansion for centuries.

Episode 6
Quirky customs rule at Treloan Coastal Holidays campground, where guests are invited to feed the farm animals and participate in an oddball regatta. Visitors house-hunt in scenic Mousehole, where humble fishermen's cottages fetch up to PS100,000.

Episode 7
St. Issey's 600 villagers spruce up the town with lush plants for the regional In Bloom competition. On the Cornish seaside, the coast guard trains for the tourist season's inevitable rescues on the area's rugged cliffs and turbulent ocean.