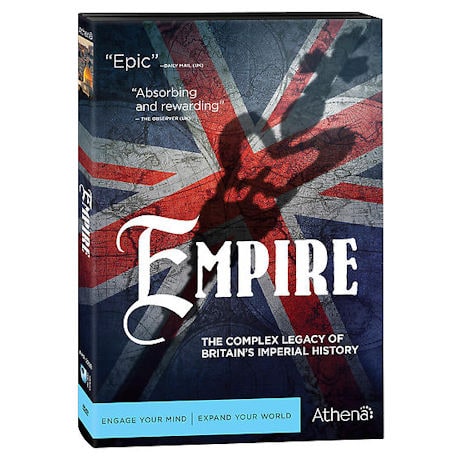 $49.99 $39.99
Share Me:
add to wish list
Overview
How did a small island nation end up ruling a quarter of the world's population? Filmed on location in former British colonies, this documentary series charts the rise of the British Empire and the source of conflicts that still reverberate today. Written and presented by BBC broadcast journalist Jeremy Paxman, based on his book Empire: What Ruling the World Did to the British. Empire includes 5 episodes, 2 DVDs, SDH, viewer's guide. From Athena.


Episodes
Disc 1
Episode 1: A Taste for Power
In India, the British learn the art of imperialism, using local rulers and troops to maintain power. But it is little more than a confidence trick, an enormous bluff--and as the mutiny of 1857 shows, it's only a matter of time before that bluff is called. Suez becomes a vital link to the empire in the East, and in the years after World War I the British find themselves embroiled in the intractable problems of Palestine.

Episode 2: Making Ourselves at Home
While early British traders adopt local Indian customs, later arrivals impose Victorian values and try to mold the country into a version of England. In the cultural melting pot of Singapore, the British keep themselves separate, but in Canada they come as settlers, determined to make a home for themselves. To build Kenya's railways, the British import Indians, many of whom are later expelled by Kenyan nationalists.

Episode 3: Playing the Game
The empire gives rise to a peculiarly British type of hero--the gentleman adventurer whose values are honed on the sports fields of England's public schools, where how you play the game is more important than winning. For men like General Charles Gordon, this would mean a determination to hold out at all costs, as at the siege of Khartoum. In the end, the spirit of fair play and the interests of empire clash head on.

Disc 2
Episode 4: Making a Fortune
British privateers prey on Spanish wealth in the Caribbean, but theft is soon replaced by trade, including the slave trade of Africans to work the islands' sugar plantations. Trade brings great wealth to Britain--spices from India, gold from South Africa, rubber from Malaya--while in China it sparks the opium wars. Gandhi takes a different approach to imperialism and so-called free trade by boycotting Lancashire cloth.

Episode 5: Doing Good
The drive for conquest also becomes a mission to help the rest of mankind, especially in "the dark continent" of Africa, where David Livingstone sets out to save souls for Christ and the people from Arab and Portuguese slavers. Cecil Rhodes indulges a different vision for the continent, one based on white domination and rule. In Kenya, the Mau Mau launch a conflict that shatters the empire's claims to moral authority.
Details
Packaging: Boxed set
Run Time: TBD
Format: Widescreen
Number of discs: 2
Language: English
Subtitles: No
Color or B&W: Color
CC: No
SDH: Yes
Region Code: 1
Aspect Ratio: 16:9
Audio Format: Stereo
Rating: NR
Preview Press
"Epic"--Daily Mail (UK)
"Absorbing and rewarding"--The Observer (UK)
"A compelling subject"--The Daily Telegraph (UK)
Awards
Hard-hitting broadcaster, journalist, and author Jeremy Paxman (Britain's Great War) has worked for the BBC since 1972. He hosted the BBC's current affairs program Newsnight for 25 years and has written several books on British history, culture, and politics.