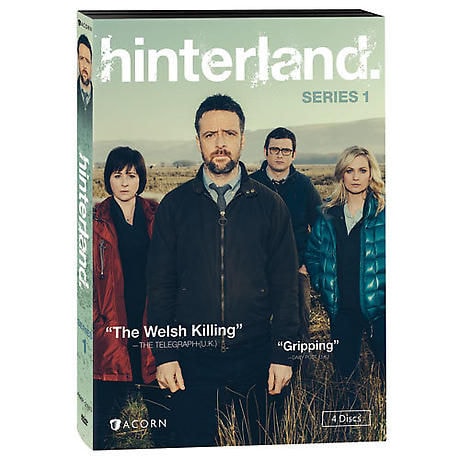 $59.99 $39.99
Share Me:
add to wish list
Overview
What Wallander is to Sweden, Hinterland is to Wales: a dark and harrowing detective drama with compelling characters and suspenseful stories. Richard Harrington (Lark Rise to Candleford) is DCI Tom Mathias, a brilliant, brooding loner on the run from his past; Mali Harries (Foyle's War) is smart, hard-working DI Mared Rhys, a local girl who knows the land and its people. Together they confront a series of mystifying murders. Filmed on location in the bleakly beautiful coastal town of Aberystwyth. 4 episodes, 6½ hrs, 4 DVDs, SDH. Mature audiences.


Episodes
Disc 1
Episode 1
Newly arrived in Aberystwyth, DCI Tom Mathias has barely settled into his caravan when he's called to a scene of carnage. A 64-year-old woman has been brutally attacked, but she's nowhere to be found. The investigation leads to a former children's home with a cruel history.

Disc 2
Episode 2
When a 69-year-old man is found bludgeoned to death at a remote farmhouse, Mathias must solve a historical jigsaw whose pieces include eerie photographs, the German Wehrmacht armed forces, murky land deals, an old letter, a local organization of professional men, and a love story spanning 70 years.

Disc 3
Episode 3
In the hills above Aberystwyth, divers find a young man's body in a quarry lake. The investigation pulls Mathias into the complex web of a close-knit community that lives by its own rules. An apparent suicide complicates the case, and an ex-convict's lonely life in a caravan is uncomfortably close to Mathias's own.

Disc 4
Episode 4
The body of a young woman in a scarlet dress is discovered at the center of a marshland. Mathias becomes too emotionally involved in the case, a fact that Mared notices. An old case comes back to haunt him, and a suspect takes matters into his own hands.
Details
Packaging: Boxed set
Run Time: 398 minutes, plus bonus programming
Format: Widescreen
Number of discs: 4
Language: English
Subtitles: No
Color or B&W: Color
CC: No
SDH: Yes
Region Code: 1
Aspect Ratio: 16:9
Rating: NR. Contains strong language, violence, and disturbing images.
Preview Press
"The Welsh Killing"--The Telegraph (UK)