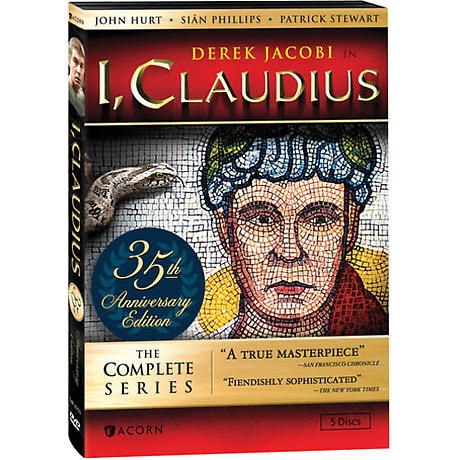 $59.99 $49.99
36 Reviews Write a Review
Item #: XA1862
An epic tale of ambition, debauchery, and intrigue, this Emmy®-winning BBC series is one of the most popular and acclaimed dramas in Masterpiece Theatre history. Based on the novels by Robert Graves, spanning the history of the Roman Empire from Augustus to Nero, it stars Derek Jacobi in a career-defining role, with Sian Phillips as the lethal Livia, John Hurt END_OF_DOCUMENT_TOKEN_TO_BE_REPLACED
Add to Wish List

An epic tale of ambition, debauchery, and intrigue, this Emmy®-winning BBC series is one of the most popular and acclaimed dramas in Masterpiece Theatre history. Based on the novels by Robert Graves, spanning the history of the Roman Empire from Augustus to Nero, it stars Derek Jacobi in a career-defining role, with Sian Phillips as the lethal Livia, John Hurt as the vile Caligula, and Patrick Stewart as the ambitious Sejanus. "Fiendishly sophisticated"-New York Times. 12 episodes, 11 hrs, 5 DVDs, SDH. Mature audiences.

Disc 1
Episode 1: A Touch of Murder
Rome, 24-9 BCE. Nearing the end of his life and surrounded by spies, Claudius, emperor of Rome, writes his family history. His tale begins during the reign of Augustus, with his treacherous grandmother, Livia, scheming to advance the career of her son, Tiberius. Her machinations prove deadly for many family members, but Tiberius's brother, Drusus, threatens her plans.

Disc 2
Episode 2: Waiting in the Wings
Rome, 3-5 CE. With Tiberius in exile, it seems that Livia has lost-but everyone Augustus chooses to succeed him dies inexplicably. Livia forces the emperor to face the truth about his wanton daughter. An omen hints that Claudius-a dull, awkward child with a stutter and a limp--might be more than he appears to be.

Episode 3: What Shall We Do about Claudius?
Rome, 9 CE. When Livia hears that Tiberius has a new rival, Julia's son Postumus, she quickly moves against him. Before he is banished, Postumus tells Claudius all he knows about Livia. Claudius is advised to keep playing the fool to ensure his safety; he weds in a marriage arranged by Livia.

Episode 4: Poison Is Queen
Rome, 13-14 CE. After decades of deception, Augustus learns of Livia's plots and writes a new will naming Postumus his heir. Soon after Livia visits the temple of the Vestal Virgins, keepers of the emperor's will, Augustus suffers severe stomach pains. With Livia's hopes finally realized, she sends Sejanus to tie up loose ends.

Episode 5: Some Justice
Rome, 19-20 CE. Tiberius rules Rome with help from Sejanus. When Claudius's popular brother, Germanicus, dies under mysterious circumstances, the Roman people protest. A trial in the Senate is rigged to clear the emperor's name. Witnesses disappear, and Caligula, son of Germanicus, sets fire to the family villa.

Disc 3
Episode 6: Queen of Heaven
Rome, 23-29 CE. Tiberius lives only for his perverted pleasures, encouraged by the monstrous young Caligula. Sejanus forces Claudius to marry his sister, solidifying his alliance with the imperial family. Livia, knowing that death is near, confesses her crimes to Claudius and reveals a prophecy claiming that he will be emperor one day.

Episode 7: Reign of Terror
Rome, 30-31 CE. The ambitious Sejanus, commander of the guard, has destroyed nearly all of his enemies. Even Tiberius, now living on Capri, is in danger. When he receives a smuggled warning letter, he wonders how to stop Sejanus, who has the guard's loyalty. Caligula makes a suggestion, and the streets of Rome run red with blood.

Episode 8: Zeus, by Jove!
Rome, 37-38 CE. On his deathbed, Tiberius names Caligula heir to the Roman throne. Caligula promises the people bread and circuses, and a new age of prosperity seems about to begin. Then Caligula falls into a coma, awakens, and proclaims himself a god. He fears just one thing: his unborn son by his own sister.

Disc 4
Episode 10: Fool's Luck
Rome, 41-43 CE. Under Claudius's rule, the empire's finances are improving. His beautiful wife, Messalina-a marriage arranged by Caligula-bears him two children and urges him to make an alliance with Silanus, governor of Spain. A valued old friend warns Claudius to trust no one.

Episode 11: A God in Colchester
Rome, 47-48 CE. While Claudius is away invading Britain, Messalina challenges a leading prostitute to a tournament of sex. She wins, scandalizing Rome, but Claudius remains in the dark. He is compelled to act when a final humiliation endangers his life. Soon after, Claudius learns that the British have made him a god.

Episode 12: Old King Log
Rome, 54 CE. Claudius marries Agrippinilla, mother of Nero and the deadliest woman in Rome. A prophecy has told him that Nero will be Rome's next ruler. Claudius knowingly seals his fate and that of his own son by naming Nero his heir. He finishes his book and buries a copy to be found centuries later.

Emmy Award Nomination for Outstanding Directing in a Drama Series (1978)