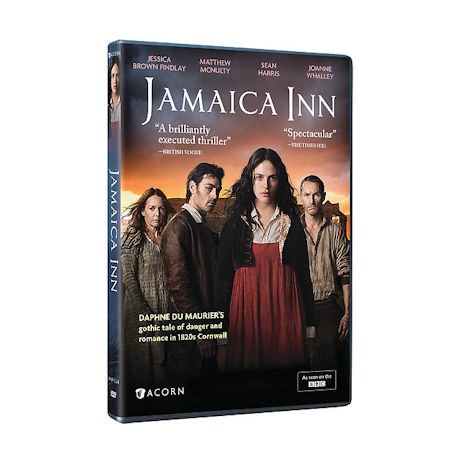 Overview
Jessica Brown Findlay (Downton Abbey's Lady Sybil) is Mary Yellan, the heroine of Daphne du Maurier's gothic coming-of-age tale set in 1820s Cornwall. Forced to live with her violent uncle after her mother dies, Mary finds herself among a band of sadistic smugglers in a lawless, windswept land. No one is quite who he seems--including the handsome, untamable Jem Merlyn (Matthew McNulty, The Paradise), the man she loves. From the BBC. 3 episodes, 3 hrs, 1 DVD, SDH.
Episodes
Episode 1
Mary Yellan hopes to make a new home with her aunt Patience and uncle Joss at their remote inn in Cornwall. Instead, she finds herself among a violent band of smugglers in a lawless land. Navigating the perils of her new life, she spars with Joss's younger brother, Jem, and witnesses a gruesome event.

Episode 2
Trapped in a desolate place, Mary fears for her innocence. She knows that Joss is not the smugglers' leader, but Patience won't tell her who is. With nowhere else to turn, Mary confides in the local vicar, Francis Davey, and his sister, Hannah. Later, a drunken Joss shares terrible secrets with Mary.