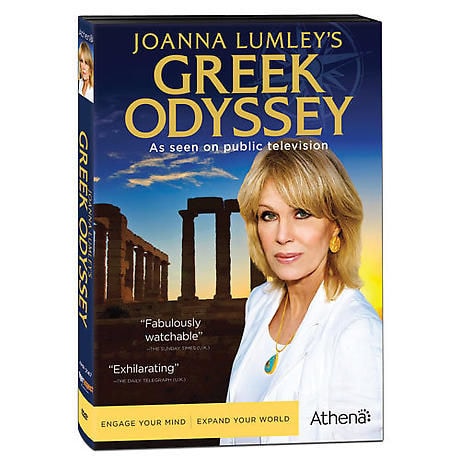 Overview
Greece has given us democracy, drama, science, philosophy, medicine, and the Muses. A seasoned, passionate traveler with a warm, human touch, Joanna Lumley (Absolutely Fabulous, Joanna Lumley's Nile) visits the Parthenon, Delphi, Mount Olympus, Crete, and other major sites, then veers off the tourist trail to show us a Greece few people see. 4 episodes, 3 hrs, 2 DVDs, SDH, viewer's guide. From Athena.
Episodes
Disc 1
Episode 1
High above Athens, Joanna views the painstaking restoration of the Parthenon-and battles vertigo. She explores mythical and historic sites in the Peloponnese, meets an Englishman who worships Apollo, visits a hedonistic nightclub, and tours the ancient theatre at Epidaurus with legendary singer Nana Mouskouri, who gives a rare performance for Lumley and a few astounded tourists.

Episode 2
Traveling from the western island of Corfu to the eastern border that Greece shares with Turkey and Bulgaria, Joanna learns how centuries of invasion and occupation have left their mark. She visits a tension-filled military outpost, retraces Lord Byron's journey by horseback through the western highlands, and hears a wrenching story from one of the last known survivors of a dark time in Greek history.

Disc 2
Episode 3
Greece is a maritime nation with more than 1,400 islands. Each has its own tales to tell and a history spanning thousands of years. Invited on board a shipping magnate's yacht, Joanna visits Crete and learns of its role in the Resistance against the Nazis; travels to Kos, the birthplace of Hippocrates, the father of modern medicine; and steps gingerly around the blowholes of Nisyros's active volcano.

Episode 4
Joanna climbs Mount Olympus, home of the ancient gods, and encounters gods of today: athletes who run in the annual marathon. She tours Thessaloniki with its controversial mayor; attends a fortune-telling festival where vulgar jokes are part of a tradition reaching back to Homer's day; and ends her journey in Meteora, where monasteries perch on sandstone pillars in the sky.
Details
Packaging: Boxed set
Run Time: 183 minutes
Format: Widescreen
Number of Discs: 2
Language: English
Subtitles: No
Color or B&W: Color
CC: No
SDH: Yes
Region Code: 1
Aspect Ratio: 16:9
Rating: NR
Press
"Engaging guide to Greece" --The Sunday Telegraph (UK)

"[Lumley's] odyssey is guaranteed to make you want to set sail." --The Observer (UK)

"Exhilarating" --The Daily Telegraph (UK)
Awards
Joanna Lumley has appeared in many hit television series and films, and she is an outspoken advocate for human rights and animal welfare.