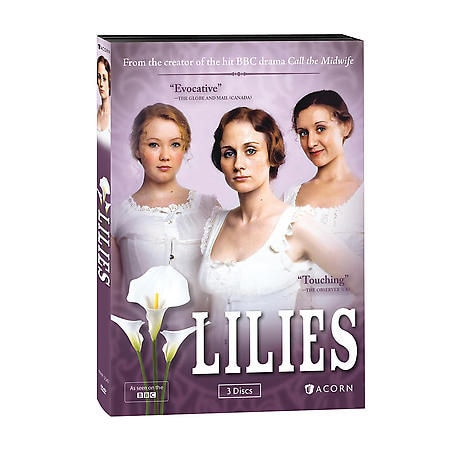 $49.99 $24.99
Share Me:
add to wish list
Overview
Three spirited sisters fight for a better life in poverty-stricken, post-WWI Liverpool. They live on the breadline, but their defiance, determination, and love for each other keep them strong. From screenwriter Heidi Thomas (Madame Bovary), this 2007 BBC miniseries is full of period detail and modern wit. Catherine Tyldesley (Coronation Street), Kerrie Hayes, and Leone are the spirited sisters; Brian McCardie (Rob Roy) is their charismatic, mercurial Dadda. 8 episodes, 7¾ hrs, 3 DVDs, SDH.


Episodes
Disc 1
Episode 1: The Chit Behind King Billy
To help get the family pianola out of hock for a street party honoring war vets, Ruby takes a job selling corsets, training all the while for the Olympic swimming tryouts. But brother Billy finds that not all of the returning soldiers are welcomed as heroes.

Episode 2: The Thunderbolt
When Iris falls head over heels for a young magician who comes to the door in search of rabbits, the rest of the family must face the unpromising prospect of running the household without her competence and self-sacrifice at the center.

Episode 3: The White Charger
At tea with her employer, Mr. Brazendale, May meets a charming photographer with obvious designs on the trusting girl. Meanwhile, Billy finds a stray stallion in the woods, which Dadda schemes to keep for the upcoming Orange Parade.

Disc 2
Episode 4: The Tallyman
Scarlet fever invades the district, and the Mosses scramble to provide for seven orphaned children and stay one step ahead of the dreaded housing inspector. But, in secret, May becomes more occupied with Mr. Brazendale's renewed attentions.

Episode 5: The Sea
Billy's best friend from the war returns, and a maelstrom of long-suppressed emotions threatens to engulf them both. May learns that she is expecting and then discovers that things aren't what they've seemed in the Brazendale household.

Episode 6: The Release
As May makes every effort to conceal her condition, Ruby takes up with a group of newfound friends who introduce her to liberating modern ideas: feminism and vegetarianism. May, however, seeks release of a different sort from her predicament.

Disc 3
Episode 7: The Serpent
When Billy inadvertently brings home a snake, a local teacher invites Mr. Moss to discuss the exotic reptile in her class. But their relationship soon turns romantic-to the horror of his daughters. Then, to his horror and rage, Dadda learns of May's condition.

"Evocative" --The Globe and Mail (Canada)