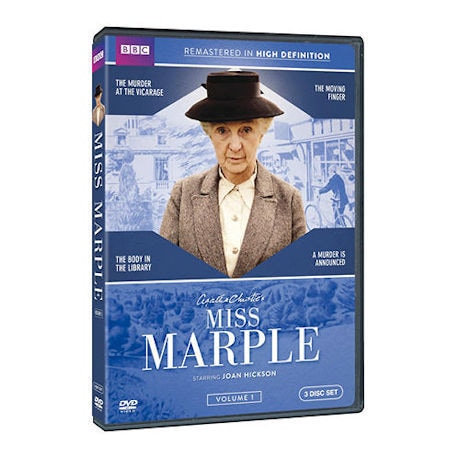 Overview
In 1946, Agatha Christie sent Joan Hickson a note that read, "I hope one day you will play my dear Miss Marple." Years later, Hickson did, taking on the role of the spinster sleuth at age 78. Many fans consider her the definitive Marple. Restored and remastered in HD, this set includes The Murder at the Vicarage, The Moving Finger, The Body in the Library, and A Murder Is Announced, all filmed in the mid-1980s. 4 episodes, 7½ hrs, 3 DVD or 2 Blu-ray discs.
DVD Extras
Packaging: Boxed set
Run Time: 485 minutes
Format: Full screen
Number of discs: 2
Language: English
Subtitles: No
Color or B&W: Color
CC: No
SDH: No
Region Code: 1
Aspect Ratio: 4:3
Rating: NR