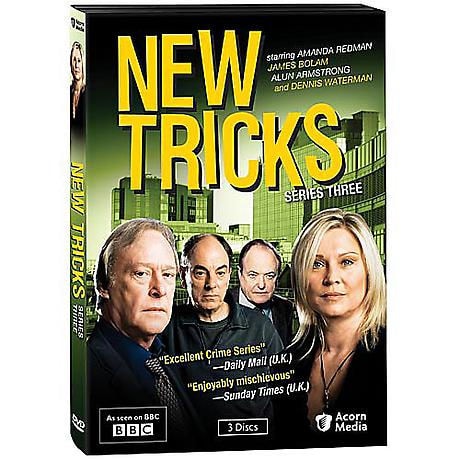 The masterful performances and top-tier guest stars make this long-running, award-winning British series an "unstoppable ratings monster" (London Sunday Telegraph) in the U.K. A drama with tongue firmly in cheek, deftly written and perfectly cast, it's "the crime show to watch" (Daily Post, U.K.). 8 episodes, 3 DVDs, approx. 466 minutes, SDH.
Episodes
Disc 1
Episode 1: Lady's Pleasure
Five years ago, a teacher died at the wheel of her husband's prized sports car. Now he wants the car back, inspiring Sandra to reopen the investigation. Her only clue: a photo of a small tattoo in a very private place.

Episode 2: Dockers
Reinvestigating the 1975 death of a union boss, the team steps into a political minefield. Was his death murder or suicide? Did he steal money from the union? And why is a Labour peer so interested?

Episode 3: Old Dogs
With a serial dog killer stalking Hampstead Heath, Sandra and her team dust off a 30-year-old case. The cruelty of the crimes affects Brian's judgment, especially when his beloved dog, Scruffy, dies.

Disc 2
Episode 4: Diamond Geezers
A notorious criminal returns to England to bury his father, leading the team to reopen the unsolved case of a murdered police informant. The investigation heats up quickly, and Brian goes undercover.

Episode 5: Wicca Work
The team takes a fresh look at the decade-old murder of a librarian when a woman insists witchcraft was involved--the victim had belonged to a coven. Brian suspects human sacrifice, and Jack has visions of his dead wife.

Episode 6: Bank Robbery
After 17 years on the run, an informant surfaces with new evidence about a deadly unsolved robbery. A crook-turned-celebrity proves to be an unwilling suspect, and Gerry must team with an old rival to solve the crime.

Disc 3
Episode 7: Ice Cream Wars
Ten years ago, a feud between two rival ice-cream businesses turned nasty when someone was shot. The original investigation focused on suspects outside of both victims' families. This time, the team looks closer to home.

Episode 8: Congratulations
New evidence leads to an arsonist's early release from prison. Free and allegedly reformed, he wants his case reopened to right old wrongs. Meanwhile, a young woman arrives at Gerry's flat claiming to be his daughter.