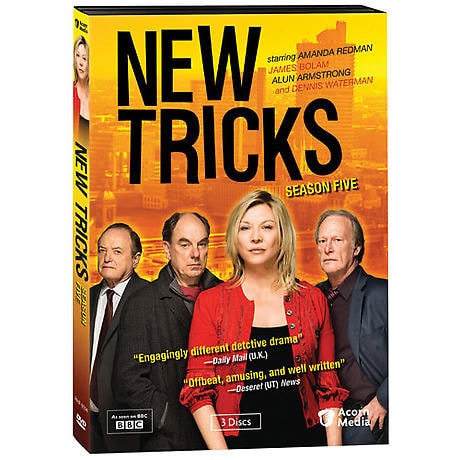 Overview
"The most popular program on British TV" (London Evening Standard) returns with more old-school crime solving and witty banter. Superintendent Sandra Pullman (Amanda Redman, Sexy Beast) and her team of aging cops tackle cold cases abandoned by the Metropolitan Police. Each detective has a fair share of personal demons: Jack Halford (James Bolam, The Biederbecke Affair) is haunted by his wife's murder. Gerry Standing (Dennis Waterman, The Sweeney) has a troubled relationship with his daughter. Brian Lane (Alun Armstrong, Bleak House) battles the bottle, and Sandra seeks the truth about her family's shady past.

Episode 2: Final Curtain
Jack is AWOL after Hanson's trial, and an ambitious young recruit steps in. The group examines the cold case of an actor's death when a biography by his daughter reveals new evidence.

Episode 3: A Face for Radio
The team investigates a 10-year-old arson at an '80s music radio station that killed a controversial DJ. With Jack still missing, Sandra, Brian, and Gerry threaten to quit rather than work with a replacement.

Disc 2
Episode 4: Loyalties and Royalties
With the team on the brink of disbanding, Brian tracks down Jack and persuades him to return. Gerry meets his heroes, the '70s rock band Bad Faith, when a deathbed confession casts doubt on the lead guitarist's apparent suicide more than 30 years ago.

Episode 5: Couldn't Organize One
The team reopens the intoxicating case of a suspicious death at a brewery. The case holds special meaning for Sandra because the original investigator, a crooked cop, was her father's colleague.

Episode 6: Magic Majestic
Nothing is what it seems when the team takes on the case of a magic trick that ended in murder. Brian plays dangerous mind games with a magician, Gerry agrees to be hypnotized, and a dead man's brother proves a master of illusion.

Disc 3
Episode 7: Communal Living
Struggling to control his alcoholism, Brian takes refuge in a commune under investigation for the unexplained death of a university student. While Sandra is suspicious about the commune and its ways, Brian defends it--until another body turns up.