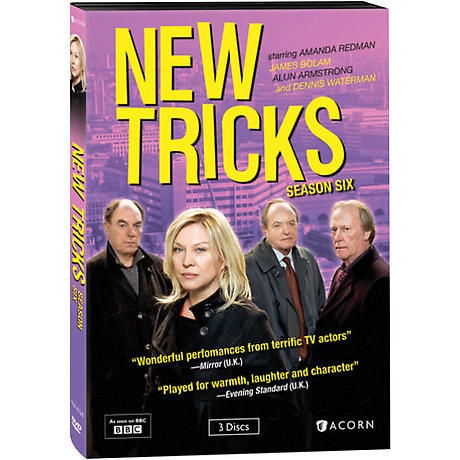 Each detective has a gloomy personal history. Jack Halford (James Bolam, The Beiderbecke Affair) lost his wife to a hit-and-run driver. Gerry Standing (Dennis Waterman, The Sweeney) is a ladies' man with a past he'd prefer to keep quiet. Brian Lane (Bleak House) is an alcoholic with marital problems. Even workaholic Sandra must cope with a shattering secret, revealed during a grisly situation. Season Six of the hit detective drama finds the team in top form, cracking cases and jokes with equal flair. 8 episodes, 3 DVDs, approx. 470 minutes, SDH.
Episodes
Disc 1
Episode 1: The War Against Drugs
Rehab can be murder. Soon after Brian starts treatment for alcoholism, a chance remark sends him on the trail of an unsolved death. The rest of the team is supposed to stay away, but they can't resist joining in.

Episode 2: Death of a Timeshare Salesman
A former call girl finds God and confesses her sins, including one that leads the team to reconsider the death of a dodgy timeshare dealer. What was formerly judged a suicide may be murder, especially when a fingerprint points towards a notorious criminal.

Episode 3: The Truth Is Out There
When the team reopens the case of a respected journalist's death, they confront UFO conspiracy theories and American government cover-ups. What did the journalist see before he died? Did he really kill himself, or was he murdered?

Disc 2
Episode 4: Shadow Show
When disturbing clips from a 1990 film noir are posted on the Internet, the team takes another look at an actress's disappearance and a producer's murder. Brian and Jack learn more than they want to know about modern policing.

Episode 5: The Last Laugh
After celebrating Gerry's birthday at a comedy club, the team reinvestigates the 25-year-old disappearance of two young political activists. Their inquiry leads to an extreme right-wing group with links to Ricky Hanson, the man who murdered Jack's wife.

Episode 6: Fresh Starts
After a desperate man insists that he saw his dead wife at a playground, Gerry agrees to help him learn the truth. An exhumation and a DNA test raise more questions than they answer. Meanwhile, Brian has problems at home.

Disc 3
Episode 7: Blood Is Thicker Than Water
Jack intervenes in a dispute on a luxury yacht and learns surprising news about a deadly riverboat disaster. At the time, it was called an accident, but the daughter of a tug captain insists it was sabotage--and she has a witness.