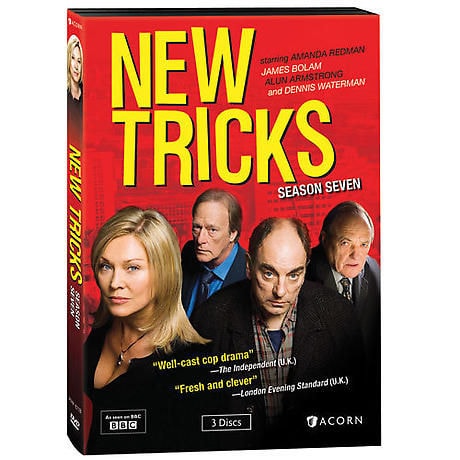 Overview
In this wildly popular crime series, aging cops and traditional sleuthing trump high-tech gadgets and modern criminology. James Bolam (The Beiderbecke Affair), Alun Armstrong (Garrow's Law), and Dennis Waterman (The Sweeney) star as three detectives pulled out of retirement to unravel cases that stumped the Metropolitan Police. Their beautiful boss, Detective Superintendent Sandra Pullman (Amanda Redman, Sexy Beast), keeps them on track and mostly out of trouble as they follow their hunches and bend the rules.

Strong writing, ample humor, and a splendid cast have made this one of the most-watched shows on British television. This time around, the team has its hands full with unsolved murders, an 18-year-old abduction, and a 30-year-old robbery that threatens the team's very existence. Guest stars include Rupert Graves (Death at a Funeral), Paul Rhys (Chaplin), Samantha Bond (Downton Abbey), and Sian Phillips (I, Claudius). 10 episodes, 3 DVDs, approx. 582 minutes, SDH.
Episodes
Disc 1
Episode 1: Dark Chocolate
After a recent rape is linked to two unsolved attacks at a chocolate factory, the team examines all three cases and discovers even more dark secrets. Meanwhile, Gerry enlists Sandra's help to quit smoking.

Episode 3: It Smells of Books
Brian goes undercover at the London Library, his "spiritual home," to learn what really happened to a cold case victim. When university professor and book lover Richard Symes fell off the roof of his college, was it suicide or murder?

Episode 4: Coming Out Ball
The 1983 abduction of an 18-year-old debutante is a very cold case that just got warmer. A former member of the Irish Republican Front has come forward with new information. Can Sandra and her team learn the truth?

Disc 2
Episode 5: Dead Man Talking
When a psychic tells a dead man's daughter that her father left unfinished business, the team reinvestigates the death of a wealthy financier. Sandra is convinced the psychic is a fraud-until he reveals a conflict involving her own late father.

Episode 6: Fashion Victim
Eight years prior, fashion designer Ritchie Levene was stabbed to death. There were plenty of suspects, but no evidence. On the eve of a retrospective exhibition of Levene's work, the team takes another look at the crime.

Episode 7: Left Field
Soon after being released from jail, pedophile John Davies confesses to abducting and killing a 5-year-old boy 25 years earlier. Suspicious of Davies's motives, the team reopens the case-to prove his innocence, not his guilt.

Disc 3
Episode 8: Gloves Off
A talented young boxer was shot and killed 15 years ago, but the case stalled when the murder weapon was never found. Now that the gun has surfaced, the team reopens the case and learns more than they want to know about professional boxing.

Episode 9: Where There's Smoke
When the team receives new information about a fatal fire, they are drawn into a dangerous criminal underworld. The original investigation was blocked by a wall of silence, which may be crumbling-if a witness can be trusted.