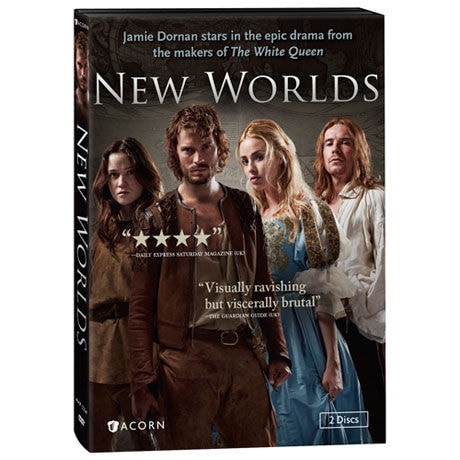 Overview
Set in England and America during the 1680s, this lavish historical drama follows four young people torn between love and ideals in a harsh new world. In England, the restored monarchy of Charles II (Jeremy Northam, The Tudors) has reverted to tyranny. In America, the colonists fight for freedom while waging war against the natives. With Jamie Dornan (Fifty Shades of Grey) and Joe Dempsie (Game of Thrones), this British miniseries is "the very antithesis of a genteel BBC costume drama ... filled with mud and blood and torture" (Times, UK). 4 episodes, 3¾ hrs, 2 DVD or Blu-ray discs, SDH.


Episodes
Disc 1
Episode 1
Charles II has been restored to the throne, but England still simmers with political unrest. When renegade Abe jolts aristocrat Beth Fanshawe from her privileged outlook, he changes both their lives irrevocably. In New England, colonists struggle to throw off the crown's control while waging war against the natives.

Episode 2
To avoid the king's agents in Massachusetts, Ned's father urges him to flee to England, and Hope faces pressure to marry. In Oxfordshire, Abe and Beth plot to blow up the clay pits run by merciless landowner George Hardwick.

Disc 2
Episode 3
Beth's life in the New World begins inauspiciously, and Ned makes a distressing discovery upon returning to America. Abe joins forces with Colonel Algernon Sidney in England and embarks on a dangerous mission.