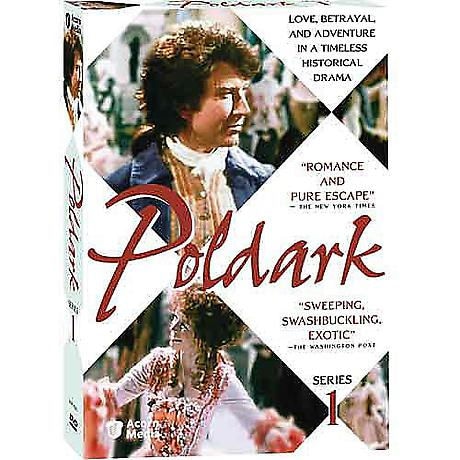 Overview
Hailed as a British Gone with the Wind, Poldark created a sensation on PBS's Masterpiece Theatre with its dashing, romantic hero and his infamous exploits. Based on the novels by Winston Graham, this classic miniseries demonstrates the enduring appeal of a gripping storyline and unforgettable characters.

Returning to Cornwall after the American Revolution, Capt. Ross Poldark (Robin Ellis, The Good Soldier) finds his life at home has fallen apart. His estate is in disarray. His former flame, Elizabeth (Jill Townsend, Cimarron Strip), is engaged to his cousin. And his family's copper mines have become targets for the predacious Warleggans, the Poldarks' bitter rivals. Duels, smuggling, and attempted murders unfold as Ross strives to resurrect his fortunes and find true love. This spellbinding saga dramatizes the deep rifts in British society on the brink of industrialization, played out against the rocky, ruggedly beautiful Cornish coast. 16 episodes, 3 DVDs, approx. 816 minutes, SDH.


Episodes
Disc 1
Episode 1
Limping and scarred, Ross Poldark returns from the American war to Cornwall after a daring escape from a French prison camp. He finds his debt-ridden father dead, his estate in shambles, and his beloved Elizabeth engaged to his cousin Francis.

Episode 2
Ross tries to drink away thoughts of Elizabeth but eventually returns to work restoring his estate. A chance meeting at the market brings Demelza Carne, an ill-bred urchin girl, into his household. Meanwhile, his cousin Verity comes to him for help after falling for a man with a dark past.

Episode 3
Ross supports Verity's romance, leading to tragic consequences, while his opposition to the wealthy George Warleggan makes him enemies with the most powerful man in Cornwall. His relationship with Demelza deepens but is complicated by the class divide.

Episode 4
While Demelza remains in misery at her father's home, the Poldark family is struck by bad fortune and a series of tragedies. Elizabeth flees her unhappy marriage and runs to Ross to rekindle their romance, but Demelza's secret threatens to come between them.

Disc 2
Episode 5
Ross and Demelza grow closer with their marriage and the birth of their daughter. However, both their families disapprove of the union, and Elizabeth can barely hide her contempt. Ross also considers a risky new business venture, and Demelza plays matchmaker for Verity.

Episode 6
Ross's business plan attracts the attention--and the ire--of the Warleggans. Later, he makes matters worse with a daring rescue mission to free his unjustly jailed tenant from certain death. Tensions run high at the Warleggans' charity ball, where Ross exacerbates the grudge.

Episode 7
The whole family feels the repercussions of Francis's betrayal, although Ross is distracted by a murder that casts suspicion on one of his employees. The crime sends the usually honorable Dr. Dwight Enys into a tailspin of doubt and self-loathing and sets Ross on a course that may ruin the Poldarks.

Episode 8
Demelza tries to make peace with Elizabeth and Francis, but her goodwill has grim results. Mad with grief, Ross finds himself entangled in yet another scandal after his attempt at aiding a wrecked ship devolves into chaos and violence.

Disc 3
Episode 9
Arrested for his role in the shipwreck riot, Ross seems doomed to an unfair trial. Francis seeks to make amends with Demelza, but his guilt over his part in her husband's fall from grace threatens to push him over the edge.

Episode 10
Demelza does everything in her power to stop Ross from being unjustly convicted, but the odds are stacked against him. The key to the trial lies in the hands of former servant Jud Paynter--a tipsy layabout easily swayed by drink and coin.

Episode 11
Furious over Ross's continued success, the Warleggans hatch a plan to financially devastate the Poldarks. At the same time, Ross and Francis agree to settle their quarrel and begin again as partners. Jud, too, has a business proposal for Ross, but it comes with many risks.

Episode 12
After an irate Warleggan and his henchmen punish Jud for his loyalty to the Poldarks, Ross's simmering dislike for George boils over into violence. Demelza has some surprising news, but her husband's reaction is even more shocking.

Disc 4
Episode 13
Demelza puts herself in mortal danger by trying to improve their financial situation. A newly optimistic Francis pays a high price for his partnership with Ross, and the family seems to be on the brink of ruin once again--until an anonymous benefactor steps in.

Episode 14
Ross and Demelza are overjoyed by the birth of their son and their change in fortune. Life appears to be going well for the Poldarks, until a villager's treachery puts Ross in danger and separates Dr. Enys from his betrothed.

Episode 15
Ross escapes the fracas unscathed, but the villagers are not so lucky. Robbed of their land and livelihoods by George Warleggan's greed, they whisper about revolt. Desperate to leave Cornwall, Elizabeth makes an unforgivable decision, and Ross risks everything to change her mind.

Episode 16
After her husband's deception, Demelza looks for revenge from some unlikely sources. Tensions run high at home and abroad: the villagers are in open rebellion and war with France lies on the horizon. The discovery of tin at the family mine gives the Poldarks financial stability, but their marriage threatens to collapse.