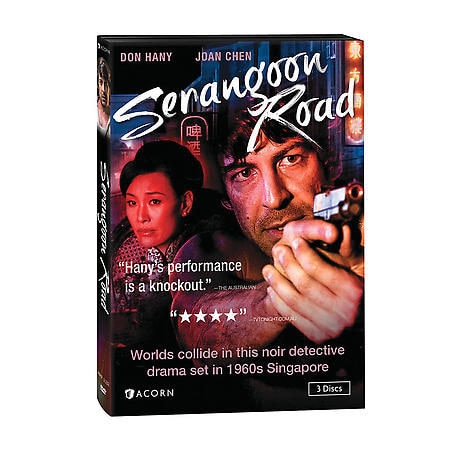 Overview
When Sam Callaghan (Don Hany) agrees to help his neighbor run her detective agency, he is pulled into a dangerous world of Chinese gangs and international politics. Classic detective noir, this 2013 collaboration between Australia's ABC TV and HBO Asia features a diverse cast set against an exotic backdrop: 1960s Singapore, a secretive, crime-ridden city at a crossroads. With Joan Chen (The Last Emperor), Maeve Dermody, and Michael Dorman. 10 episodes, approx. 557 min, 3 DVDs, SDH.
Episodes
Disc 1
Episode 1
When a US Navy sailor is stabbed to death outside a nightclub, CIA officials seek the help of the Cheng Detective Agency. Proprietress Patricia Cheng recruits Sam Callaghan, an Australian expat who grew up in Singapore, to exploit his ties to the local community and find the killer.

Episode 2
A Chinese woman arrives in Singapore searching for her husband, from whom she was separated during World War II and its aftermath. While Sam and Su Ling hunt for answers about the man's fate, Sam also approaches the Red Dragon gang about the break-in at the detective agency.

Episode 3
Riots in the streets have put the whole city on edge. When Patricia attempts to make a delivery to a client, she is attacked and her photographs are stolen. Sam's efforts to help her ultimately lead him to a mysterious client, political dissidents, and MI6 activities.

Episode 4
Maxwell Black of West Pacific Exports hires the agency to investigate rumors that one of his employees is on the take--specifically Frank Simpson, Claire's husband. Meanwhile, Kay Song presses Sam to find the traitor in the Red Dragon's ranks.

Disc 2
Episode 5
While visiting a village hospital sponsored by West Pacific Exports, Claire discovers that its malaria medicine is ineffective. As Sam tracks down those responsible for the drug tampering, Claire learns a harsh lesson in political realities.

Episode 6
One night during the Hungry Ghost Festival, a newborn boy is left on the doorstep of the detective agency. As they try to identify the baby's parents, Sam and Patricia contend with ghosts from their own pasts.

Episode 7
The police suspect trade unionists led by Lim Chee Kit are responsible for the latest bombing. Businessman James Lim-Chee Kit's brother-hires the agency to locate him before the authorities do. But over the course of the job, Kang and Su Ling both find their futures in jeopardy.

Disc 3
Episode 8
When two young Australian women vanish from a freighter near Singapore, the Australian consulate asks Sam to discover what happened to them. Meanwhile, Patricia copes with devastating revelations about her late husband.

Episode 9
Sam's old friend Robert Collier is arrested for murdering his date, bartender and aspiring reporter Angelica Warnock. Convinced of his innocence, Sam tries to clear his name-but even Robert himself can't remember what happened that night.