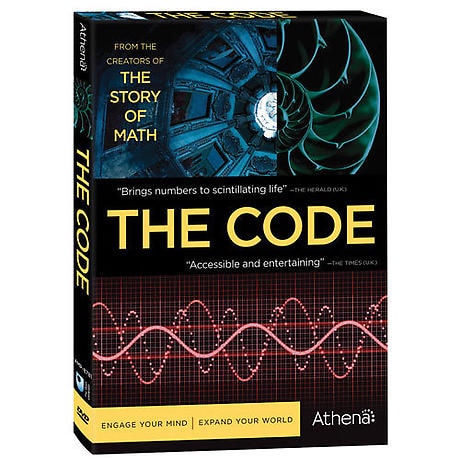 Overview
Do we live in a universe of random events, or are there patterns to what happens? Hosted by Oxford professor Marcus du Sautoy (The Story of Math), this series draws connections between Chartres Cathedral and cicadas, commuters and migrating birds. 3 episodes, 3 hrs, 2 DVDs, SDH, viewer's guide.
Episodes
Disc 1
Episode 1: Numbers
What do the precise proportions of Chartres Cathedral have in common with the life cycle of the lowly cicada, with how we hear sound, and with the intricately designed shell of a small marine animal called a nautilus? In their work on the great gothic cathedrals, medieval masons had glimpsed a deep truth they believed echoed God's creation. Du Sautoy identifies the key to understanding the universe in their sacred numbers and, in examples ancient and modern, the amazing power of pi.

Episode 2: Shapes
Professor Du Sautoy travels to the Giant's Causeway, the amazing collection of hexagonal basalt columns off the coast of Northern Ireland. Folklore explains this geological formation in a tale involving a local giant eager to get to grips with a Scottish rival 80 miles away across the Irish Sea. But Du Sautoy finds written into these rocks a fundamental truth about the universe-a hidden geometric force that underpins all nature, from the structure of honeycombs, soap bubbles, and salt crystals to the work of visionary painter Jackson Pollock and the virtual worlds of Pixar movies.

Disc 2
Episode 3: Prediction
Making sense of our world has always been linked to our ability to predict what will happen in the future. Professor Du Sautoy examines how the flight of migrating birds obeys a simple and elegant code-a pattern of behavior as applicable to commuters passing through Grand Central station as it is to serial killers planning their next attacks. While so much of life appears random, Du Sautoy shows how it is really governed by the code of chaos, in which small variations can cause vastly different outcomes, often referred to as the "butterfly effect."
Details
Packaging: Boxed set
Run Time: 174 minutes, plus bonus programming
Format: Widescreen
Number of Discs: 2
Language: English
Subtitles: No
Color or B&W: Color
CC: No
SDH: Yes
Region Code: 1
Aspect Ratio: 16:9
Rating: NR
Trailer Press
"Brings numbers to scintillating life" --The Herald (UK)

"Accessible and entertaining" --The Times (UK)

"Science TV at its best" --The Daily Record (UK)

"A remarkable achievement" --The Times (UK)
Awards
Oxford professor and winner of the London Mathematical Society's Berwick Prize, Marcus du Sautoy contributes regularly to The Times and The Guardian (UK, has presented many TV and radio programs, and has authored numerous books, including Symmetry.