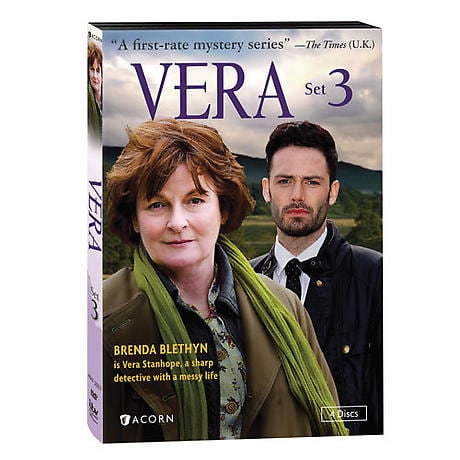 Vera is supported by her trusted team, including right-hand man Detective Sergeant Joe Ashworth (David Leon, Rock 'n Rolla). A family man, Ashworth is ever trying to strike a balance between home and work. Meanwhile, forensic pathologist Billy Cartwright (Paul Ritter, The Eagle) and Detective Constable Kenny Lockhart (Jon Morrison, High Times) tend to bring out the scathing side of their boss. Guest stars in these four new feature-length dramas include Saskia Reeves (Luther), Dean Andrews (Life on Mars), and Liam Cunningham (Game of Thrones). Vera Set 3 includes 4 episodes, 4 DVDs, approx. 369 minutes, SDH.
Episodes
Disc 1
Episode 1: Castles in the Air
Three girlfriends spend the weekend partying at an isolated country retreat, and one ends up dead with a shotgun blast to the chest and a local hunter the prime suspect. Too late, Stanhope realizes that the dead woman was not the intended target any more than her suspect was the actual shooter.

Disc 2
Episode 2: Poster Child
A respected surgeon is murdered and his two teenage daughters abducted, leaving a wife and mother distraught and Stanhope at a loss for a motive. Ashworth spurs his boss to look for a family link to both the killing and the kidnappings.

Disc 3
Episode 3: Young Gods
When an extreme sports fanatic plunges to his death from a cliff after an apparent fight, Stanhope and Ashworth begin to search for potential enemies. An estranged ex-girlfriend will shed no tears at the young man's death, but the detectives discover that someone else has been holding a grudge as well.