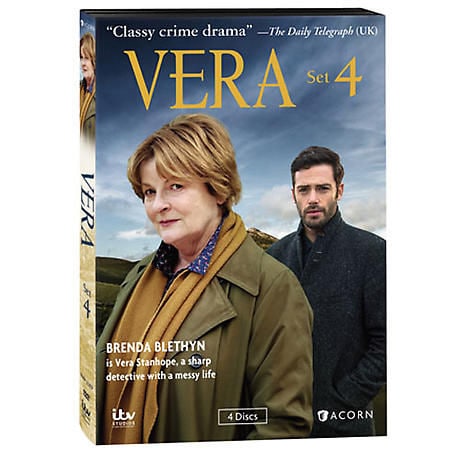 Overview
Two-time Oscar® nominee Brenda Blethyn (Pride & Prejudice, Secrets & Lies) returns as Detective Chief Inspector Vera Stanhope, whose off beat manner and frumpy appearance belie a knack for catching killers. Stanhope is ably assisted by Detective Sergeant Joe Ashworth (David Leon, Rock 'n Rolla), her colleague, confidante, and surrogate son. Ashworth tries to balance his family responsibilities with the demands of working for a boss who seems to have little else in her life but the job.

In this series, Stanhope and Ashworth take on four new cases on their Northumberland beat-the stabbing of a senior citizen aboard a rush-hour train, the brutal murder of a young professional at a beach resort, the shooting of a loner out on the moors, and the drowning of a respected businessman. Based on the bestselling novels of Ann Cleeves, this atmospheric drama delivers compelling characters, superb performances, and suspenseful mysteries. Vera Set 4 features 4 new episodes, 4 DVDs, approx. 370 minutes, SDH.
Episodes
Disc 1
Episode 1: On Harbour Street
Stanhope investigates the stabbing death of a senior citizen aboard a crowded rush-hour train-and learns that the chief witness to the woman's killing is Ashworth's young daughter. The case takes the detectives to a tightknit community in the quiet coastal town where the victim lived and where, Stanhope suspects, the killer knew her well.

Disc 2
Episode 2: Protected
When a young man is beaten to death along the seafront at a popular resort, Stanhope wonders why he was there rather than at his father's retirement party. Suspicion falls on a local arcade owner with a grudge against the father. However, the inspector believes the answers may lie with the deceased's own family-the domineering patriarch, stepmother, underachieving brother, and a sister who appears not to have had contact with the others for years.

Disc 3
Episode 3: The Deer Hunters
Two local poachers are shot at and their truck torched-while less than a mile away, a man recently returned to the area is killed with a single round from a hunting rifle. The gamekeeper from the nearby estate denies involvement in the incidents, and Stanhope and Ashworth keep all their options open as they enter a world dominated by rural tradition and life on the moors.

Disc 4
Episode 4: Death of a Family Man
Was the dead body found in a local river a case of suicide or murder? The victim was a successful businessman who was supposed to be on a business trip to Dublin. The waters muddy further when Stanhope and Ashworth discover that other law-enforcement authorities are interested in the man and that there was more to his family life than met the eye.
Details
Packaging: Boxed set
Run Time: 370 minutes
Format: Widescreen
Number of Discs: 4
Language: English
Subtitles: No
Color or B&W: Color
CC: No
SDH: Yes
Region Code: 1
Aspect Ratio: 16:9
Rating: NR
Press
"Blethyn is wonderful"--The Times (UK)