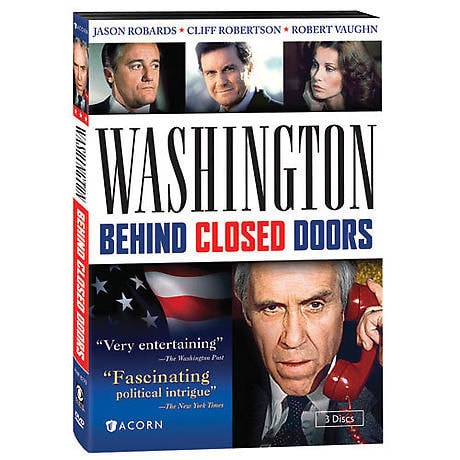 Overview
Based on John Ehrlichman's post-Watergate novel The Company, set against the backdrop of a war in Southeast Asia, this award-winning miniseries tells the story of a paranoid president (Jason Robards, All the President's Men), an administration under siege, and a reckless group of White House aides desperate to hold on to power. With Cliff Robertson, Stefanie Powers, Robert Vaughn, Andy Griffith, and John Houseman. 6 episodes, 9 hrs, 3 DVDs, SDH. Mature audiences.
Episodes
Disc 1
Episode 1
The prospect of a new president sends shockwaves throughout Washington, especially at Langley, where CIA director Martin has more than a few secrets he would prefer to keep hidden. President-elect Monckton has personal as well as political reasons to distrust Martin, and he makes no secret of wanting his own man in charge of "the Company."

Episode 2
Martin finds an administration ally in the national security advisor, who helps ensure no change at the CIA. The White House's communications chief tries to improve relations with the press, but leaks about an unannounced escalation of the war in Southeast Asia derail his efforts. Chief of staff Flaherty begins to close the circle around the president and cut him off from outside points of view.

Disc 2
Episode 3
Monckton tries to reach out to the antiwar protesters, but when he is rebuffed decides to go on the offensive against his political enemies. Ambitions rising, the president begins to look ahead to a second term in office. Meanwhile, the White House believes it has found the person who has been leaking confidential information to the press.

Episode 4
The death of former president Esker Anderson leaves Martin without an important ally. The CIA director becomes more vulnerable still when the FBI finds out how he helped expose the questionable fundraising methods employed by the president's reelection campaign.

Disc 3
Episode 5
Half a million demonstrators invade Washington to protest the administration's conduct of the war in Southeast Asia. Monckton takes a tough stance against the protesters, confident he can ride a patriotic wave to victory in the next election. He also decides that the time has come for him to see the Primula Report.

Episode 6
Monckton believes he is about to secure his place in history by carrying 50 states and launching a diplomatic opening to China. But first he has to take care of Bill Martin, who makes it clear he will not go without a fight. As Monckton chooses whether or not he can live with Martin's terms, events elsewhere begin to spiral out of everyone's control.
Details
Packaging: Boxed set
Run Time: 550 minutes, plus bonus programming
Format: Full screen
Number of Discs: 4
Language: English
Subtitles: No
Color or B&W: Color
CC: No
SDH: Yes
Region Code: 1
Aspect Ratio: 4:3
Rating: NR. Contains coarse and offensive language.
Other: Due to the age of these programs and the improved resolution that DVD provides, you may notice occasional flaws in the image and audio on this DVD presentation that were beyond the studio's ability to correct from the original materials.
Press
"Fascinating political intrigue" --The New York Times

Emmy Award Nomination for Outstanding Directing in a Drama Series (1978)