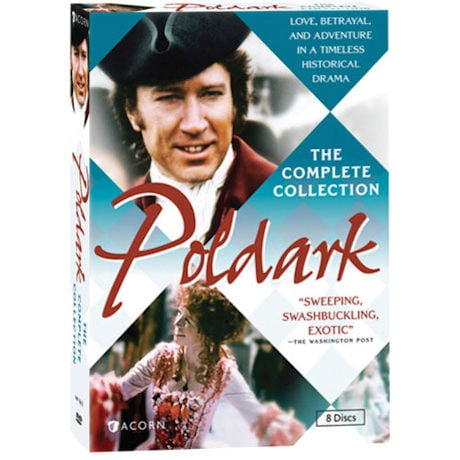 Overview
A sensation on PBS's Masterpiece Theatre, this spellbinding saga tells the story of the dashing Captain Ross Poldark (Robin Ellis, The Good Soldier) and his ever-changing fortunes. Based on the novels by Winston Graham, these two classic miniseries teem with daring deeds and romance, all set against the spectacular backdrop of the ruggedly beautiful Cornish coast.

In Series 1, a wounded Ross returns from the American Revolution after a brave escape from a French prison camp. He finds his father dead, the woman he loves engaged to another man, and a viperous businessman eager to drive his family from its land. Series 2 follows Ross through further tumultuous times, from saving his marriage to reclaiming his fortune as he attempts to defeat his predatory rival once and for all. 29 episodes, 8 DVDs, approx. 25 hours, SDH.
Episodes
Series 1 (Discs 1-4)
Returning to Cornwall after the American Revolution, Capt. Ross Poldark finds his life at home has fallen apart. His estate is in disarray. His former flame, Elizabeth, is engaged to his cousin. And his family’s copper mines have become targets for the Poldarks’ bitter rivals. Duels, smuggling, and attempted murders unfold as Ross strives to resurrect his fortunes and find true love. This spellbinding saga dramatizes the deep rifts in British society on the brink of industrialization, played out against the rocky, ruggedly beautiful Cornish coast.