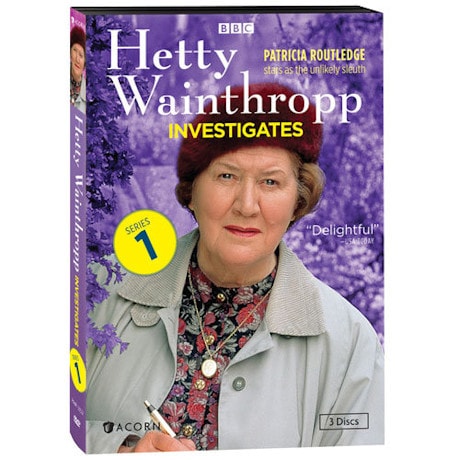 Overview
Acclaimed actress Patricia Routledge (Keeping Up Appearances) brings her genius for wry comedy and warmhearted drama to the starring role in this popular series. Like an earthier Miss Marple, Hetty applies her seasoned intuition and fierce moral compass to the job of righting wrongs in England's towns and villages.

Life as a private detective begins at 60 for this sprightly Lancashire housewife. Instead of winding down as her husband, Robert (Derek Benfield, Rumpole of the Bailey), expects, she's just getting started. Hetty takes a job to make ends meet and accidentally discovers her natural gift for sleuthing. In these first six episodes, she finds an eager sidekick in destitute teenager Geoffrey (Dominic Monaghan, Lost, The Lord of the Rings trilogy) and puts her sensible pumps to the pavement in search of mysteries to solve. Includes two episodes not seen on the PBS Masterpiece Mystery! broadcast. 6 mysteries, 3 DVDs, approx. 5½ hours.