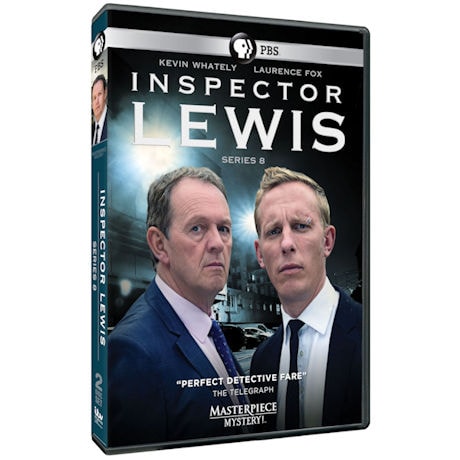 Starting at $29.99
Share Me:
add to wish list
Overview
Kevin Whately returns for the really, truly final season of a role he has played since 1987, first with the late John Thaw in Inspector Morse. As Lewis and Hathaway (Lawrence Fox) tackle the usual complex crimes in the academic haven of Oxford, a new Chief Superintendent, Joseph Moody (Steve Toussaint), clashes with Lewis over his more traditional policing methods; Laura Hobson (Clare Holman) contemplates early retirement; and Hathaway confronts his past. With Angela Griffin as DS Lizzie Maddox. 3 feature-length mysteries, 4 ½ hrs, 2 DVDs, SDH.
Episodes

One for Sorrow
Lewis & Hathaway are called in to investigate the apparent death by drug overdose of an over achieving student who also happens to be an amateur taxidermist. Lewis' team must then delve into the worlds of social media, drugs, taxidermy, alternative art, and the homeless Eastern European community.

Magnum Opus
When a College Dean is found bludgeoned to death with a rock in local woodlands, Lewis and Hathaway are called in to investigate. They must then uncover the guilty secret their victims share in order to learn the identity of not just the killer, but potential new victims too.

What Lies Tangled
When an idyllic Oxford summer's day is torn asunder by a gruesome parcel bomb, Lewis & Hathaway are called into investigate. With his six-month trip to New Zealand with Hobson on the horizon, Lewis is in a race against time to save both his career and his relationship.