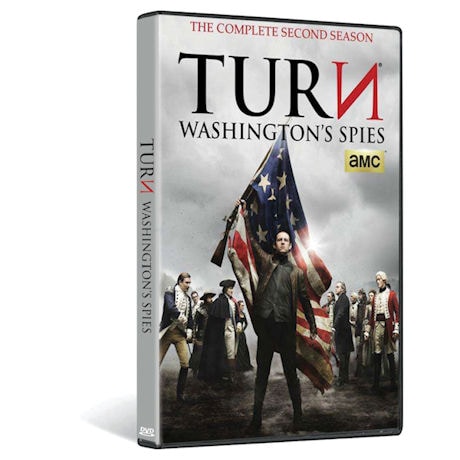 Overview
Set during the Revolutionary War, based on the book Washington's Spies by Alexander Rose, this suspenseful AMC series tells the story of America's first spy ring. Abe Woodhill (Jamie Bell, Billy Elliot) is a cabbage farmer turned patriot, a real- life hero who joins with childhood friends to form the Culper Ring, a team of secret agents who help George Washington defeat the British. "Cloak-and-dagger with redcoats and bayonets" - Entertainment Weekly. 10 episodes, over 7 hrs, 3 DVDs.
Episodes
Thoughts of a Free Man
Abe is eager to get to Washington, while Rogers finds himself a new job.

False Flag
Abe returns from New York. Andre prepares to put on a play. Washington supports Arnold through his injury. Caleb and Ben work with Sackett on developing their operations. Rogers heads for New Jersey as the King's Royal Messenger.

Men of Blood
Ben and Abe find a better form of communication and discuss new plans with Anna. Caleb and Rogers get into an altercation while on their missions. Abe plays checkers with Townsend in New York.

Houses Divided
Anna takes action when learning of Abe's capture. Ben and Caleb struggle to come up with a new plan. Simcoe pushes himself back into Anna's life. Andre gains vital intelligence. Mary speaks her mind to Judge Woodhull.

Valley Forge
Washington has anxieties about an illness he believes he has. Major Hewlett's tale of capture is finally revealed. Abe fights to survive his own capture.

Providence
Caleb and Ben plan to free Abe from his capture in New York. Major Hewlett must survive the wild to make his way back to Setauket. While planning his next attack, Washington is told that an alliance with the French is imminent. Andre and Peggy receive unfortunate news on their status in Philadelphia when a visitor comes unannounced.

The Prodigal
Tensions between Major Hewlett and Simcoe reach a critical point. Abe gets released from Captivity and searches for Townsend. Arnold makes quite the impression on the Shippens. Back at Valley Forge, Ben tries to protect Washington from an internal threat.

"Cloak and dagger with redcoats and bayonets" - Entertainment Weekly

"An interesting look at the American revolution" - History on Film