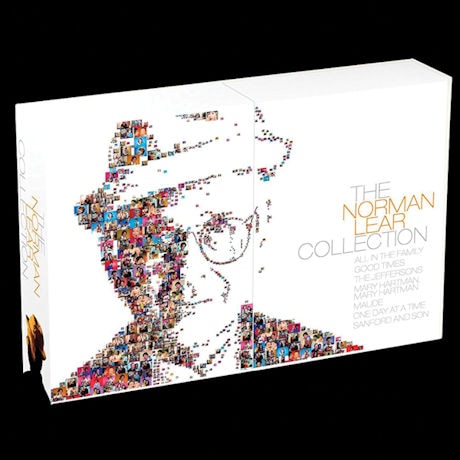 Overview
Broadcast pioneer, Oscar® nominee, and multiple Emmy® winner Norman Lear has had a long and stellar career as a TV writer and producer. At one point, he had 9 shows on the air simultaneously. This set includes the complete first seasons of "All in the Family," "Sanford and Son," "Maude," "Good Times," "The Jeffersons," and "One Day at a Time," volume one of "Mary Hartman, Mary Hartman," and many bonus features. 220 episodes, 19 DVDs.
Episodes
This collection includes the complete first seasons of these television shows:
All in the Family
Good Times
The Jeffersons
Maude
Mary Hartman, Mary Hartman (volume one, or the first 25 episodes)
One Day at a Time
Sanford & Son
Details
Packaging: Boxed set
Run Time: Not available
Format: Full screen
Number of discs: 19
Language: English
Foreign Language Subtitles: French, English, Spanish
Color or B&W: Color
CC: No
SDH: No
Region Code: 1
Aspect Ratio: 1.33:1
Audio Format: Stereo
Rating: NR
Cast
All in the Family
Carroll O'Connor, Jean Stapleton, Rob Reiner, Sally Struthers

Sanford & Son
Redd Foxx, Demond Wilson, LaWanda Page, Don Bexley, Whitman Mayo, Nathaniel Taylor
Press
Norman Lear has held up a mirror to American society and changed the way we look at it - President Bill Clinton
Awards
Norman Lear is an Academy Award nominee, an Emmy Award recipient, and the recipient of the prestigious Peabody Award. He received the Humanist Arts Award from the American Humanist Association and he was among the first seven television pioneers inducted into the Television Academy Hall of Fame. He was awarded the National Medal of Arts and is the recipient of the Women in Film Lucy Award. Mr. Lear serves on the National Advisory Board of the Young Storytellers Foundation and has written articles for the Huffington Post. He is a trustee emeritus at The Paley Center for Media.