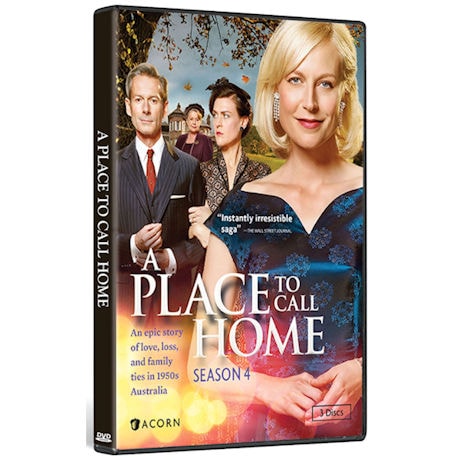 $59.99 $49.99
16 Reviews Write a Review
Item #: XA8662
As the smash hit drama A Place To Call Home (Season 4 DVD) returns, Sarah and the wealthy Bligh family face new challenges amid sweeping social change in 1950s Australia. Villainous Regina has finally ensnared George in marriage, but she continues to plot against Sarah, exploiting the rising fear of communism to target her rival. As Sarah teams up with END_OF_DOCUMENT_TOKEN_TO_BE_REPLACED
Add to Wish List

A Nagging Doubt
Tensions arise at Ash Park while Sarah's life hangs in the balance and Carolyn's life falls apart. How will George react when he learns of Regina's plot?

Bad in a Good Way
Regina weaves another tendril around George. James is rattled by Olivia's confession. Jack proves to Carolyn that she's worthy of him.

When You're Smiling
Sarah and Roy go to Sydney. Can Carolyn admit the truth to Elizabeth? Henry's confession forces James to sort out his true feelings.

Happy Days Are Here Again
Sarah, Elizabeth and Anna devise a plan to destroy Regina. James shares his feelings with Henry - but will Harry's return spell trouble in paradise?

The Trouble with Harry
Elizabeth and Olivia work together to protect James from Harry. Jack and Carolyn are rattled as Sir Richard works his way back into their lives. Gino takes control of his marriage.

You're Just in Love
Jack and Carolyn's big day arrives, but has Sir Richard done enough to spoil it for them? Anna makes a huge confession and Gordon is convinced that Sarah killed Milly. Regina tempts Sgt. Taylor.

There'll Be Some Changes Made
Jack and Douglas take matters with Sir Richard into their own hands when the refuge comes under threat. James grapples with his old feelings for Harry. Sarah and Elizabeth support Doris through matters of the heart.

Where Will the Baby's Dimple Be
James supports Olivia as she faces a heartbreaking truth. Elizabeth gets a wonderful surprise. George's poor timing leaves him on shaky ground with Sarah.

And The Blind Shall See
Anna pushes Gino beyond his limit. Sarah's advice helps Olivia find a new direction.

Catch the Tiger
While Regina's behavior spirals, George asks for the family to go about business as usual. James and Henry's relationship hits shaky ground.

All Good Things
Olivia chooses a new path. Harry finds a new place to call home. Jack and Carolyn stand by their daughter. Sir Richard beings to draw up a blueprint for revenge against the Bligh family.

"A visceral thrill" - The Globe and Mail (Canada)

"A gritty drama laden with twists and emotion" - Metro (UK)

"A gritty drama and mystery series rolled into one" - TV Guide