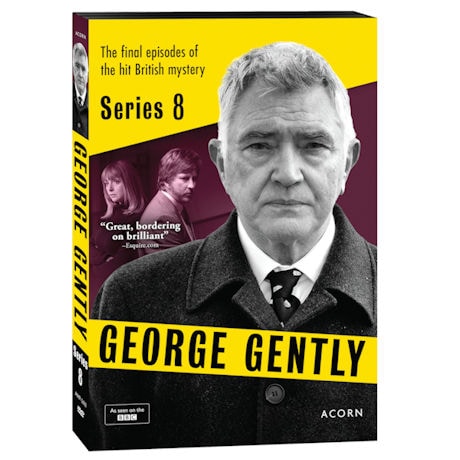 $39.99 $27.99
Share Me:
add to wish list
Overview
The final two cases in the hit British mystery series take us back to Northumberland. It's 1970, the start of a new decade, and a time of radical change for women, political paranoia in the Cold War, and industrial unrest in the air. Includes Gently Liberated and Gently and the New Age. Martin Shaw stars in the title role, with Lee Ingleby and Lisa McGrillis as his sidekicks DI Bacchus and DS Rachel Coles. 2 episodes, 90 min, 2 DVDs or 1 Blu-ray disc, SDH.
Episodes
Episode 1 - Gently Liberated
When DCI Gently and his team investigate a body found in a chemical storage tank, they learn that the victim's wife was convicted of his murder eight years ago. But Gently decides to reopen the case against the wishes of DI Bacchus, who had worked on the original investigation. With mentor and protégé at odds, Rachel attempts to heal their rift, while also navigating the difficulties of being a woman in a mostly male police force.

Episode 2 - Gently and the New Age
In one of the final acts of his career, Gently provides evidence in a case against corrupt police officers; but when he is asked to look into a young woman's unsolved murder, Gently hopes to expose one last cover-up. Still at odds with his superior, Bacchus asks for Rachel's help investigating the murder of a worker killed during a picket riot. Both cases seem to be linked to a charismatic and ambitious politician.
DVD Extras
• Interviews with the cast and crew (24 min.)
• Behind-the-scenes featurettes (13 min.)
Details
Packaging: Boxed
Run Time: 3 hours
Format: Widescreen
Number of discs: 2
Language: English
Foreign Language Subtitles: No
Color or B&W: Color
CC: No
SDH: Yes
Region Code: 1
Aspect Ratio: 16:9
Audio Format: Stereo
Rating: NR